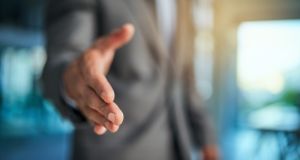 ‘If you think of the many and terrible ways in which trust has been abused and betrayed in Ireland over the last two decades, there is something precious in our willingness to keep doing so.’

In the summer of 1966, the Nobel Prize-winning German novelist Heinrich Böll was, as usual, in Achill, Co Mayo. From early May to the end of July, the entire banking system in Ireland shut down because bank officials went on strike.

Böll noted in his journal that this was “surely an insane situation, when, in a modern country with a modern economy, cheques must be accepted for weeks, for months, merely on trust . . . when a completely modern economy suddenly places itself in a position of barter and ‘Trust me, fellow countryman.”

6 I got rid of 95% of my stuff, almost everything I’ve ever owned

7 How did a remote Mayo town become Ireland’s most Covid-infected place?

11 Euler: a mathematician without equal and an overall nice guy

12 Covid-19: How to look after yourself if you catch the virus

19 Special needs school closures: ‘I thought they thought more of my child’

20 Traveller who tried to book hotel wedding awarded €15,000 for discrimination

21 Una Mullally: Government is failing when it comes to leading us through this pandemic

24 More than half in North want vote on a united Ireland, poll finds

26 Colum Eastwood: Seamus Mallon’s offer is still on the table if unionism is interested

32 Covid-19: How are other EU countries dealing with schools?

34 Garda trauma: Sean was a garda for six weeks when he saw his first body