If how we treat Travellers is our model for ‘rooting out’ racism, the prospects look bleak 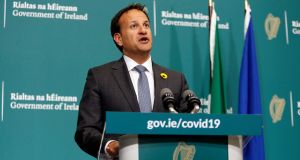 Taoiseach Leo Varadkar told Pat Kenny on Virgin TV on Friday: ‘We don’t see many black or brown judges, or in the Dáil – I’m the only one, I think, at the moment – don’t see many presenters on TV, for example, and that needs to change.’ Photograph: Leon Farrell/Photocall Ireland/PA Wire

First a warning: the beginning of this column contains some highly offensive language. I quote it because otherwise the point could not be made.

In 2011, the State initiated a very rare prosecution for online hate speech under section 2 of the 1989 Prohibition of Incitement to Hatred Act. The accused, a 27-year-old Kerry man, had created a Facebook page entitled “Promote the use of knacker babies for shark bait”. He suggested on it: “Instead of using animals for shark bait, they could use knack babies. Also as food at feeding time in the zoo. And for testing new drugs for viruses.” A total of 644 people joined this Facebook group, and many of them added further abusive comments.

19 New to the Parish: Abdullah Afghan and Fatima Abdullah arrived from Afghanistan via Pakistan

22 Miriam Lord: The Bisto Kids get a taste of their own Davy gravy

29 Before you buy an electric vehicle, ask: Will I drive it enough to make it eco-friendly?

34 Long Covid in children: New data is cause for concern, scientists say

36 Home office, home bar and scope for another home alongside for €1.55m

38 Covid-19 Vaccine Tracker: What's available in the Republic of Ireland and what else is coming?