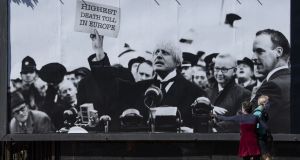 A woman points towards a satirical poster from the group Led By Donkeys depicting Boris Johnson as former British prime minister Neville Chamberlain delivering his “Peace for Our Time” speech, Kentish Town, London, on May 19th. Photograph: Justin Setterfield/Getty Images

Even as Ireland dips its toes in the shallow end of escape from lockdown, there is a problem looming on the farther shore. It is Britain.

We exist on an archipelago, most of whose population lives on the eastern island. We share a common travel area. The air route between Dublin and London is, in normal times, the busiest in Europe. In the world we inhabited until recently, about a million trips were made from Britain to Ireland every year.

1 Angela Merkel sweeps in to save the euro zone
2 Tyrone midwife on the cover of Vogue magazine
3 In six months we will be in the grip of a 1980s-style recession
4 Normal People: Full-frontal nudity was not its most radical feature
5 Barack Obama urges those protesting in US to seize the momentum
6 Newton Emerson: Brussels playing games with Irish sea border
7 Covid-19: Varadkar downplays expectation of accelerated lifting of restrictions
8 Coronavirus: A further 123 cases reported in meat processing plants over past week
9 ‘I saw young girls get kicked, hit, sprayed and dragged off gasping for air’
10 With Lincoln looking on, the crowd dropped to their knees as 7pm approached
11 Property price drop of up to 12% this year a ‘reasonable’ assumption – McDonagh
12 Stocktake: Has Warren Buffett lost the magic touch?
13 William James: in praise of the Irish goodbye
14 Normal People: The origins of Connell and Marianne
15 Luke ‘Ming’ Flanagan bares his bottom half to European Parliament
16 Will Lafayette Park spell the end of Trump?
17 Michael McDowell: Black Americans fear the future and so should we
18 Madeleine McCann case: Police identify German prisoner as suspect
19 Chartered Land moves closer to approval for Dublin’s tallest tower
20 Making dinner is the new getting dressed. Just ask Selena Gomez and Gigi Hadid
21 Mother of three (41) who had to fundraise for her own cancer treatment has died
22 Brother is dragging his heels as executor of uncle’s will - is there anything I can do?
23 Why is there a criminal investigation into the Black Lives Matter Dublin protest?
24 President expresses ‘greatest heartbreak’ at clashes with protesters in US
25 Can you be racist against white people?
26 Aer Lingus wants quarantine period axed to resume flights in July
27 ‘Tralee felt friendlier than Killarney. We discovered a different welcome there’
28 Henry Grattan looms large over modern Ireland
29 Why Facebook wants the EU to decide the limits of free speech
30 The sad, secret life of Whitney Houston
31 All pupils will not be able to return to class at the same time – INTO
32 No personnel have rejoined Defence Forces under scheme, Dáil told
33 Emma de Souza: The UK must address the issues around identity in Northern Ireland
34 ‘F**king n***er.’ A racist incident on Bachelors Walk
35 Netflix has revealed its most-watched content. You might be surprised
36 Donohoe warns of cost of pandemic as budget deficit swells to €6.1 billion in May
37 Miriam Lord: Michael Ring came to praise his department, not bury it
38 Body trouble: How to keep actors safe while filming sex scenes
39 Independents offered Jackie Healy-Rae style deal to support new coalition
40 Travellers on halting site ‘thick with rats’ challenge Cork council housing plan
Real news has value SUBSCRIBE