Fintan O’Toole: Ireland has just saved the UK from the madness of a hard Brexit

If the UK mirrors customs union, why bother leaving EU in the first place? 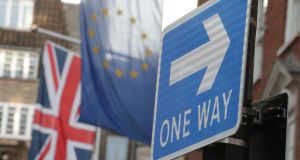 Let’s not understate the import of what Ireland has just achieved. It has not just secured an outcome that minimises the damage of Brexit on this island. It has radically altered the trajectory of Brexit itself, pushing that crazy careering vehicle away from its path towards the cliff edge.

This saga has taken many strange turns, but this is the strangest of all: after one of the most fraught fortnights in the recent history of Anglo-Irish relations, Ireland has just done Britain a favour of historic dimensions. It has saved it from the madness of a hard Brexit. There is a great irony here: the problem that the Brexiteers most relentlessly ignored has come to determine the entire shape of their project. By standing firm against their attempts to bully, cajole and blame it, Ireland has shifted Brexit towards a soft outcome. It is now far more likely that Britain will stay in the customs union and the single market. It is also more likely that Brexit will not in fact happen.

1 Minister resigns over Dominic Cummings’ Covid-19 lockdown trip
2 The great unlocking: Top holiday destinations welcome back tourists
3 We are ‘sale agreed’, but can we go back with a lower offer?
4 Working from home: New costs, new stresses and little relief
5 Richard Corrigan offers €90,000 wedding prize for frontline healthcare worker
6 What Courtney Love did straight after she left 1980s Dublin
7 Coronavirus: Nursing homes used ‘painters’ overalls’ as PPE due to shortage
8 Might coronavirus trauma permanently change New York?
9 Fintan O'Toole: Last week's hysteria shows politicians and judges need to get a grip
10 André Leon Talley: How Anna Wintour threw her right-hand man ‘under the bus’
11 Kate Mulgrew ‘to move to Ireland’ if Trump wins second term
12 Coronavirus: What will reopen in Ireland’s phases to ease restrictions?
13 Next government could bring in work-from-home tax incentives – Taoiseach
14 Gerry Thornley: Home and away Six Nations could be its ruination
15 ‘Alarmingly immature’: Farm machinery stunt videos criticised
16 Do we really want children taught by teachers dressed in visors and face masks?
17 Amy Schumer’s lockdown: ‘I watched Normal People, a beautiful show. There’s so much sex’
18 Restaurants and gastropubs hope to avoid a dry reopening
19 Ryanair to challenge Lufthansa’s €9bn aid
20 Archaeologists are ‘quite sure’ they have found Red Hugh O’Donnell’s burial place
21 Tributes paid to Ireland’s deputy ambassador to China who died on Sunday
22 Maureen Dowd: Trump has been wearing a mask for years
23 Eason to lay off 150 staff as it prepares for June reopening
24 Joint accounts: if one of us dies, can the other access the money?
25 HSBC board rethinks overhaul and seeks even deeper cuts
26 Maureen Gaffney: ‘Covid-19 has scored a direct hit on our most basic psychological drives’
27 McKillen companies get court order on size of basements
28 Coronavirus: Almost 5.5m cases recorded globally as UK’s death toll passes 47,000
29 Judge incorrect to dismiss drink-driving charge, rules High Court
30 Hot-desking continues at bank call centres, workers say
31 Swimming ban at Dublin's Merrion strand due to poor water quality
32 Dominic Cummings affair reflects Brexit exceptionalism
33 Aviva 10-year ticket holders seek clarity over payment
34 New pre-booking app for customers a hit with retailers
35 Merck leaps into Covid-19 development fray with vaccine, drug deals
36 Coronavirus: No new Covid-19 deaths reported in State for first time since March
37 Come for the houses but stay for the drama: Selling Sunset is back
38 Man admits rape of boy after drugging him with pain relief substance, court told
39 Leaving Cert students must register for calculated grades by Thursday evening
40 Third level gears up for blended learning
Real news has value SUBSCRIBE