There will be no justice for victims and the bereaved. But we can at least have the truth 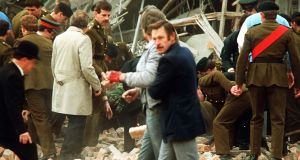 The scene of the Enniskillen bombing seconds after the blast in November 1987. Photograph: Pacemaker

In the anatomy of contemporary European savagery, the Troubles in Northern Ireland barely register as a pin prick. What is 3,500 deaths over 30 years when we think of 100,000 over three years in the war in Bosnia? But what marked the Troubles is not the scale of suffering but its intensity. It happened, not just in a small society, but disproportionately at the blandly euphemised “interfaces”. Even leaving aside the atrocities perpetrated in Dublin, Monaghan, Birmingham, Guildford and other places outside Northern Ireland, there were 16,209 bombings, 36,923 shootings and 47,541 people injured.

The Methodist Church has estimated that one in three people of all ages in Northern Ireland have been directly or indirectly affected by this violence. Within the most affected areas, the proportion must be far higher. And while the needs of the victims are paramount, there is also trauma for those who inflicted violence and for their families.

1 Kathryn Thomas goes staycationing just as new travel restrictions come in
2 ‘No demand... because there are no people’ at well-known Dublin pub
3 Coronavirus: No further deaths and 57 confirmed cases reported in State
4 Sinn Féin apologises as member resigns over social media abuse
5 O’Doherty ‘trying to evade’ service of defamation proceedings, court hears
6 When will the first Covid-19 vaccine be used in Ireland?
7 Coronavirus: Three children test positive at creche in Co Meath
8 Coronavirus: Non-essential travel from US set to be banned within days
9 ‘We can be fined how much?’ Shoppers mask up in Dublin city centre
10 HSE says fix for Covid Tracker app rolled out to all Android users
11 Covid-19 cases in Co Kildare running at almost eight times national average
12 ‘Customers are very confused’: Motor dealer outlines EV reality
13 Covid-19 incidence in the Republic set to surpass that of UK
14 Buying a second home now that we work from home
15 Face masks developed in Ireland could help meat-plant workers
16 Nearly 30,000 could lose pandemic payment if they do not confirm eligibility
17 New call centre to track passengers arriving at the State's ports and airports
18 Teddy’s Ice Cream issued with closure order by food safety body
19 Una Mullally: Covid-19 has exposed the serious injustices of Irish society
20 Weekly costs in public nursing homes over 60% higher than private ones
21 Geena Davis: ‘I was, like, Hot dog! I’m in something that started change’
22 Coronavirus is new, but your immune system might still recognise it
23 ‘I have become a shouter, and I am worried it is damaging my children’
24 Aaron Brady found guilty of involvement in robbery that led to garda’s death
25 Shelbourne Hotel operator Marriott posts bigger-than-expected loss
26 All eyes on Tenet, the spy movie with everything to prove
27 Ireland ‘wildly unlikely’ to meet 7% carbon reduction goal, says economist
28 Rory McIlroy: Maybe I’m just not as good as I used to be
29 My sporting disappointment: Jimmy White and the elusive World Championship
30 Teenager was ‘clinging to buoy for 30 minutes’ before rescue
31 How vulnerable Irish in Zimbabwe have been helped during the Covid-19 crisis
32 Offaly meat plant suspends operations pending test results
33 Want to exercise but can’t face going for a run? Here’s what to do
34 Asylum seekers without Leaving Cert now eligible for third-level grant
35 ‘Democracy at the precipice’: Journalist takes on Rodrigo Duterte
36 Coronavirus: Northern Ireland reports first death in almost a month
37 ‘Our hearts are broken’ – implications of fresh lockdown sink in
38 Bank of Ireland does U-turn after refusal to reimburse ‘smishing’ victims
39 Survey finds ‘huge appetite’ for remote working
40 James Bond fans name their favourite 007 (he’s not from Navan)
Real news has value SUBSCRIBE