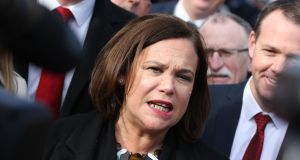 Just four days before the general election, the PSNI found a viable bomb attached by magnets to a refrigerated trailer parked in the Silverwood industrial estate in Lurgan, Co Armagh. The bomb had been placed there some days earlier by the Continuity IRA in the expectation that the trailer would be loaded on to a ferry bound for Scotland. The PSNI believed the aim was to blow up the ferry on January 31st, Brexit day. The Continuity IRA denied this and said the bomb was intended to be smuggled to Britain: “It was timed for Britain’s exit from the EU and to bring attention to the sea border.” Either way, the device could have killed any number of entirely innocent people.

Shouting 'Up the ‘Ra' is not a performance by historical re-enactors – it is a live device, primed to explode into contemporary reality

In the Republic, news of this incident was rather swamped by the imminence of the election and the polls showing the high probability of a surge towards Sinn Féin. But it is worth revisiting, precisely because of that surge. For many voters, especially those too young to remember the Troubles, the IRA’s 30-year campaign of violence is “the past”. To make an issue of it now is to introduce an irrelevance, for no reason other than to deny the legitimacy of Sinn Féin’s electoral success. But this is a past with a very active afterlife.

1 A letter to Ireland from Italy: this is what we know about your future
2 Coronavirus: New powers for gardaí expected to come into force
3 Coronavirus: Republic reports 17 further deaths, 325 new cases
4 Coronavirus: Notion of a rapid economic recovery is at best wishful thinking
5 Covid-19: Critically ill Irish patients to take part in global clinical trial
6 Coronavirus outbreaks in nursing homes, hospitals to be tackled in new plans
7 Tempers fray as coronavirus lockdown fatigue hits Italy and Spain
8 From eating healthily to staying warm, how to treat Covid-19 in the home
9 No April Fool jokes please, we are not in the mood
10 Miriam Lord: Vigilant Richard Boyd Barrett keeps the Hungary at bay
11 Look on the bright side: International Space Station visible in Irish skies tonight
12 How five days of evangelical worship set off the coronavirus outbreak in France
13 Coronavirus: France, Spain and UK suffer highest daily death tolls
14 Remote working doesn’t suit everyone, and it exposes woolly leadership
15 Heavy drinking linked to health problems later in life, study finds
16 Coronavirus: Ireland needs careful action to prevent a severe fall in living standards
17 Nice to see you: Which is the best video calling option around?
18 Body of woman found in house in Killiney, south Dublin
19 Coronavirus: Trump warns that the US faces ‘a very tough two weeks’
20 Coronavirus: More than 650 beds secured for asylum seekers in direct provision
21 10 hilarious Irish comedy videos to watch on YouTube
22 From yoga to HIIT training, your guide to solitary exercise
23 Coronavirus and children: The red flag symptoms to watch for
24 Coronavirus: Letters flow to self-isolating father whose children were found dead
25 Coronavirus: Northern Ireland death toll rises to 28
26 Fierce backlash to Dutch hard line on eurobonds
27 Booker International longlist: six of the best?
28 Coronavirus tales confirm – and shatter – German stereotypes
29 Coronavirus: Equipment shortfall brings test results down to 1,500 a day
30 I was on the Peru rescue flight. This is what happened
31 Medtronic shares ventilator design publicly to increase production
32 Netflix has revealed its most-watched content. You might be surprised
33 The Strokes: ‘There was conflict, fear, and we got through it and made records’
34 Fintan O’Toole: We can’t help giving meaning to this absurd virus
35 Spring dresses to dream about, whether you like them flirty or feminine
36 Richie Sadlier: I’ve learned the best strategy for me is to limit my thoughts to today
37 Construction firm stops work on national children’s hospital
38 Dilosk backer Attestor Capital abandons Irish bank deal
39 Trinity College Dublin acquires IFSC block for €16m
40 The Irishman living in lockdown in Madrid as it is brought to its knees by Covid-19
Real news has value SUBSCRIBE