Fintan O’Toole: If Brexit is so great, why is Britain acting like it’s not happening? 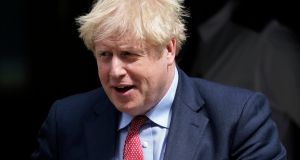 Last autumn, the British government spent £46 million (€50.6m) on its largest propaganda campaign since the second World War. Its aim was to prepare the country for Brexit. In January, the UK National Audit Office reported that “it is not clear that the campaign resulted in the public being significantly better prepared”.

So this week, Boris Johnson’s administration launched a massive advertising blitz to prepare Britain for Brexit.

1 Sand-hued cyclepaths changing the face of south Dublin coast
2 Irish in Australia: ‘It’s not so easy for some people just to kick back home’
3 Midlands lockdown: ‘Why shut down Offaly and leave Dublin open?’
4 Meat plant clusters may be down to softly-softly approach
5 Midlands lockdown: Movement restrictions in place for residents of Kildare, Laois and Offaly
6 Inside the dog-trafficking trade: ‘After drugs, it’s guns, then pups’
7 How a ship abandoned by its owner brought deadly cargo to Beirut
8 Harry McGee: We are seeing the return of Straight-Talking Leo
9 Midlands lockdown could extend to other areas, warns Covid-19 team
10 Main points: What restrictions have been imposed on Kildare, Offaly and Laois?
11 Cars to give way for Sandymount cycle path
12 Meet the Bearman of Buncrana: ‘I knew about Joe Exotic for years’
13 Cliff Taylor: As we reawaken the economy, we find Sleeping Beauty has a hangover
14 Masks Q&A: Who has to wear them in shops and what happens if you don’t?
15 Ross O’Carroll-Kelly: ‘We could be in DeVille’s among people who get where we’re coming from. Literally the Vico Road’
16 ‘Draconian’: TDs from across Midlands shocked and angered over lockdown
17 Warning of ‘economic meltdown’ in Kildare
18 Escape to west Cork: Majestic views, spectacular food and a warm welcome
19 Have young people stopped following Covid-19 advice on travel and parties?
20 British cash for Northern Ireland shows scale of Brexit disruption
21 David McWilliams: John Hume understood the power of credit
22 Pandemic problems: Experts answer your queries on sex, parenting and relationships
23 Scarlet for ya: Paul Mescal does classic Connell in The Rolling Stones’ new video
24 10 upgrades that will add value to your home and 5 that probably won’t
25 All eyes on Tenet, the spy movie with everything to prove
26 ‘Saudi Arabia is where the opportunities will happen in future’
27 Coronavirus: Community transmission picking up pace as only eight counties see no increase in cases
28 Home renovation basics: the costs and how to get started
29 MSD buys Takeda biologics plant in Dunboyne
30 Catholic Church faces challenges as places of worship reopen
31 Scientists uncover biological signatures of the worst Covid-19 cases
32 Unholy war: Frank McNally on controversial memorials of a Dublin cathedral
33 Cute Donegal cottage rentals being discovered at last by the Irish
34 Rubber about to meet the road as counties weigh up financial hit
35 DoneDeal suspends adverts for sale of dogs after spate of dog thefts
36 Summer style: the latest news in Irish fashion
37 Sporting Cathedrals: Semple Stadium, the very centre of the hurling universe
38 Kate Tempest announces they are non-binary and changes name to Kae
39 Seán Moncrieff: Laundry is the ultimate absurdist pursuit
40 Cambodia Bill to ban women wearing short skirts sparks outcry
Real news has value SUBSCRIBE