Fintan O’Toole: Greens have no choice but to enter government 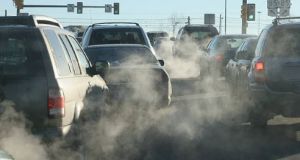 “The problem for the Greens is that, on the big issues, they’ve been proven right. What were once eccentric and exotic positions are now the bloody obvious.” File photograph: Getty

The maxim that no good deed goes unpunished requires little proof. Life supplies that most days and twice on Sundays. But if further evidence were demanded, one might point to the fate of the Green Party. Its punishment for being concerned with the good of humanity is that it has no real choice but to form a government with two parties most of its members distrust and some of them despise. The Greens are being subjected to moral blackmail, but with the twist that the blackmailer is within. It is their own values that force them to take the power that is on offer.

The problem for the Greens is that, on the big issues, they’ve been proven right. What were once eccentric and exotic positions are now the bloody obvious. Last week, Met Éireann produced a stark visual representation of the change in temperature in Ireland over the last century, with blue stripes for cooler years and red for hotter ones. Recent years present an ever-thickening wall of red stripes. Last year, Ireland’s average air temperature was a full degree hotter than in the period 1961 to 1981.