Fintan O’Toole: Gangsters who call themselves the New IRA are calcified cliché

Sinn Féin no longer accepts the legitimacy of crypto-fascist ‘republicanism’, but it won’t disavow it either 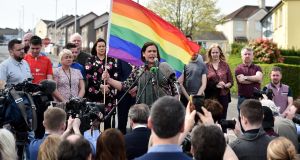 Mary Lou McDonald: Sinn Féin’s position is to be “heartily sorry” for “those who were hurt by the IRA”, but not to be one bit sorry for the “armed struggle” in which they were hurt. Photograph: Charles McQuillan/Getty

Dissident republicans are neither. The idea of dissidence is to oppose and contest received ideas, to challenge calcified cliches. The gangsters who call themselves the New IRA and their groupies in Saoradh are nothing but calcified cliché. They endlessly recycle dead platitudes and poses. They are military re-enactors with real bullets, museum dummies with live bombs. And republicanism is a philosophical tradition about which they have no clue, a way of thinking about a democracy in which, as Philip Pettit has put it, we can look one another in the eye without reason for fear or deference. Fear and deference are what these bullies seek to create, first in their own enclaves and then for the rest of us.

In fact, these people are not even, properly speaking, Irish nationalists. The core demand of Irish nationalism has always been self-determination for the Irish people as a whole. The Irish people as a whole, North and South, had that act of self-determination on May 22nd, 1998, when we voted simultaneously on whether (in effect) to accept the Belfast (Good Friday) Agreement. It was supported by 71 per cent north of the Border and 94 per cent in the South. On an island-wide basis, 86 per cent of voters supported the agreement. That is and remains the emphatic will of the people who share this island. The so-called dissidents are in revolt, not against “the forces of crown”, but against the self-determination of the Irish people.

1 ‘It was pitch black’ - Rescued teenager describes night afloat with her cousin in Galway Bay
2 Tipperary mushroom plant suspends work as staff test positive for Covid-19
3 Warning to beach-goers over venomous weever fish hiding in the sand
4 Coronavirus: 67 additional cases but no new deaths reported in the State
5 Nine tenants evicted from north Dublin property by men in masks and dark clothing
6 Britain fails yet again to take Ireland into account
7 ‘Staycation’ is just another sad casualty of the war against pointless pedantry
8 Coronavirus: Number of outbreaks in Irish homes rising for five straight weeks
9 Garda killer Aaron Brady will be almost 60 by time he leaves prison
10 Worst sporting moment: White knuckle ride on a hate-filled night at Windsor
11 Thirteen bizarre, brilliant things we’ve learned from podcasts
12 Housing activists assist tenants to re-enter property following eviction
13 ‘A smoking gun’: Infectious coronavirus retrieved from hospital air
14 Avoca warns of redundancies due to coronavirus
15 Turn tomatoes and feta cheese into something magical
16 Inside Meghan and Harry’s new $14.7m nine-bed, 16-bath California home
17 Coronavirus: We must save lives but we also need to live
18 Donald Trump indulges false ‘birther’ theories about Kamala Harris
19 ‘Overwhelming’ support for closing streets around Grafton Street to traffic
20 Children in Dublin who use public transport should walk or cycle, education dept advises
21 Grounded Aer Lingus pilots develop fix for turnaround glitches
22 Covid-19: Taxi drivers, plumbers and carpenters among self-employed to get new €1,000 grant
23 Aaron Brady, the man who said with pride he was a cop killer
24 Conor Pope’s staycation diary: ‘It’s like I’m staring at a Polaroid of my childhood holidays’
25 British tourists scramble to leave France before quarantine
26 Lucky to be alive - Cousins rescued at sea after clinging to a lobster pot for 15 hours
27 Where are they now? The mixed fortunes of gang linked to Det Garda Donohoe killing
28 Government has ‘no current plans’ to follow Spanish outdoor smoking ban
29 GAA in Ballymun: The whole team were called ‘scumbags’ by grown adults
30 €2.1 million recovered after sophisticated fraud against Dublin firm foiled
31 Diarmaid Ferriter: Island mentality and threat of infection
32 ‘It was like somebody put a furnace in my core’: Michelle Obama on menopause
33 UK education secretary under pressure to quit over A-levels ‘fiasco’
34 The ‘Templemore Miracles’: How a fake bleeding statue led to an IRA truce
35 Emollient Micheál Martin hears baby talk from Boris Johnson
36 Relieved mother of rescued women says paddleboards will never ‘darken doors’ again
37 Covid-19: Ireland cannot keep relying on volunteers for contact tracing
38 ‘The quarantine 15’: Don’t be ashamed of those extra pounds
39 Man facing trial over Kevin Lunney false imprisonment challenges court jurisdiction
40 Taoiseach warns against ‘second systemic shock’ of no-deal Brexit
Real news has value SUBSCRIBE