Fintan O'Toole: English self-mockery has gone beyond a joke 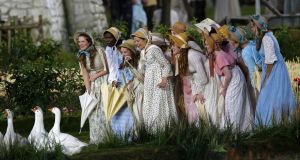 The old country: performers during a scene showing a pre-industrial rural England as part of the opening ceremony of the London 2012 Olympic Games. Photograph: Mike Blake/Reuters

In his very funny and very sad novel about the years leading up to Brexit, entitled Middle England, Jonathan Coe captures a moment that now seems strangely distant.

Looking at the gloriously bonkers opening ceremony for the Olympic Games in London in July 2012, Coe’s protagonist, Doug, is initially sceptical. But he “watched it with a mounting sense of admiration that was soon bordering on awe. The scale of the spectacle, the originality of it – the weirdness, at points . . . This eccentric hymn to Britain’s industrial heritage was the last thing he had been expecting, but there was something hugely affecting and persuasive about it . . . what he felt while watching it were the stirrings of an emotion he hadn’t experienced for years – had never really experienced at all, perhaps, having grown up in a household where all expressions of patriotism had been considered suspect: national pride. Yes, why not come straight out and admit it, at this moment he felt proud, proud to be British, proud to be part of a nation which had not only achieved such great things but could now celebrate them with such confidence and irony and lack of self-importance.”