Fintan O’Toole: Criticism is not unpatriotic – awkward questions save lives

Mistakes are inevitable in this crisis. What matters is learning from them 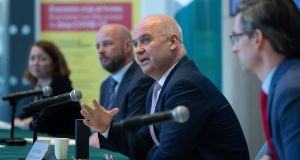 The National Public Health Emergency Team: neither elected representatives nor the media have access to the meetings of by far the most influential body in the management of the crisis. Photograph: Colin Keegan, Collins Dublin

In July 1915, patriotic fervour was at fever pitch in Britain. Criticism of the conduct of the Great War was close to treason. But Bernard Shaw insisted that “if the English people stop the fiercest criticism of their rulers on Monday, the soldiers will be in brown paper boots on Tuesday; munitions will run short on Wednesday; and before Sunday ten thousand men will lose their lives unnecessarily”. In a national emergency, closing down one’s critical faculties isn’t patriotic. It’s the best way to guarantee that mistakes multiply and that poor decisions are not reversed.

This is hard to accept if you are trying to manage a pandemic under almost intolerable pressure. When you have your finger in the dyke, it is only natural to give another finger to the onlooker who tells you that some water is leaking through. But it is precisely because of the pressure that scrutiny is more necessary than ever. We are in the hands of human beings who are trying to deal as well as they can with a crisis unprecedented in their lifetimes caused by a virus whose full effects are still unknown. Honest mistakes in this arena are not shameful. They are inevitable.

1 Maureen Dowd: Biden has his limitations but he’s no Trump
2 US passengers fly into Dublin: ‘I’m here for six days. I guess I’ll have to stay inside’
3 Keith Duggan: Bubba Wallace tweet shows just how troubled Donald Trump’s mind is
4 Forget bulging muscles; strength is all about nerves
5 Quarantine process to be tightened as health officials grow nervous
6 Covid-19: Restrictions on travelling abroad may last several years, expert warns
7 Back with our old friends at eir – and nothing seems to have changed
8 50 best Irish albums of all time – in order
9 Una Mullally: Phoenix Park travesty is a litmus test for the Greens
10 Stunning image of comet Neowise captured over Dublin Bay
11 Anne Enright: ‘Nuala O’Faolain was an impossible person, to whom we owe so much’
12 Yellowstone: Kevin Costner looks like he’s just stepped on something sharp
13 Off the charts: why this paint colour is Instagram's favourite
14 Thandie Newton names names. Will Hollywood punish her?
15 Disease expert says jailing tourists who breach quarantine would send clear message
16 Dave Hannigan: Notre Dame’s Fighting Irish leprechaun needs its ass kicked
17 A whole bowl of Creole – and don’t skimp on the shrimp
18 If tourists are such pariahs should we not be testing them on arrival?
19 Dublin has crowd-free weekend as pubs long for July 20th restart
20 My marriage is boring and polite. How do I make my husband interested in me?
21 Jack Charlton’s own grievances endeared him to Irish fans
22 My husband had to become my carer after we had our son. I was diagnosed at 26
23 Maria Steen: ‘Progressive’ views permeate daily life
24 TV View: Proper Irish wake for Big Jack, the man who gave the nation notions
25 Tusla policy ‘endangering’ victims of child sex abuse, say therapists
26 ‘My rent here is so low it’s a joke’
27 Leisure facilities continue to close as Covid-19 magnifies insurance crisis
28 Hillary without Bill? The Clintons’ alternative life
29 ‘Jack used to call me his official grasshopper keeper. We had a great time’
30 Trump wears face mask in public for the first time
31 Taoiseach urges British people not to holiday in Ireland at present
32 Gardaí given guidance on new face mask regulations hours before they become law
33 The Gael Becomes Irish: the prospects for the Irish language in Ireland today
34 Developer lobbies to rezone Howth Castle land for housing
35 The sad, secret life of Whitney Houston
36 Sweden’s grim Covid-19 result: More death and nearly equal economic damage
37 Luke Kelly sculpture at North Wall vandalised for seventh time
38 Two arrested as part of investigation into bogus personal injury claim
39 Jack Charlton obituary: One of Ireland’s greatest adopted sons
40 Jack Charlton’s tactics were divisive but he transformed Irish expectations
Real news has value SUBSCRIBE