Fintan O’Toole: Coronavirus has ended the era of political risk

Who needs a politics of disruption when Covid-19 is disrupting the world? 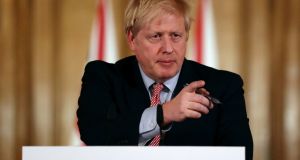 One way to think about the 21st century so far is in terms of three successive waves of risk: financial, political, existential. In the years leading up to 2008, appalling risks were being taken in the global Las Vegas of deregulated casino capitalism. Anyone fretting about these risks was told: “We have it under control. It’s going to be just fine.” They didn’t and it wasn’t. Ordinary citizens then discovered that, while the rewards had gone overwhelmingly to a tiny elite, the risks had been borne all along, unknowingly, by the little people.

Many of those citizens responded by saying “Okay, if you want us to accept risks, we’ll show you what risk looks like.” They unleashed a wave of political risk, of Donald Trump and Brexit, of voters deciding that since the safety they had been assured was an illusion, they may as well gamble on grand gestures of rage and resentment. So what if your new ruler is a pathological liar and a buffoon? They all lie. They’re all buffoons. Better, in his warped logic, to go with the liars who were honest enough to lie openly.

1 Coronavirus: Ten more deaths confirmed in Republic
2 Coronavirus: Man who allegedly spat at garda brought to court by gardaí in protective gear
3 Coronavirus: Husband unable to say farewell to wife of 51 years
4 Páirc Uí Chaoimh testing centre closes due to lack of kits
5 Maureen Dowd: Coronavirus has made a national shrink of Andrew Cuomo
6 People should carry ‘evidence’ of travel reasons if exceeding 2km limit
7 Man (30s) assaulted by group at supermarket in North Co Dublin
8 No-stress coffee traybake works every time
9 Irish flight bringing PPE from China arrives in Dublin
10 If you think governments are spending money now, just wait
11 Chicago-based Irish Senator forced to let go 500 staff over pandemic
12 Liz Nugent: ‘People have accused me of being brave, but what is brave about surviving?’
13 Isolation on the Wild Atlantic Way: ‘I stopped here for the day – and never left’
14 Wuhan’s Irish emerge blinking in sunlight as coronavirus controls ease
15 Coronavirus: World’s oldest man marks 112th birthday in isolation
16 Late Late Show with Miriam O’Callaghan: The most surreal primetime TV I’ve ever watched
17 New measures planned to tackle coronavirus in nursing homes
18 Coronavirus: Government publishes list of essential services
19 ‘Magnificent’ Conor Connelly remembered after sudden death
20 David McWilliams: We need to totally reimagine economics
21 Man (28) charged over alleged threat to kill woman and children
22 Remote working doesn’t suit everyone, and it exposes woolly leadership
23 Older people on isolation: ‘I have plenty of food but not much appetite’
24 Benign impact of Covid-19 on air quality and carbon emissions
25 Coronavirus: 14 more deaths as list of essential workers published by the Government
26 Coronavirus: UK will not return to normal for ‘at least six months’
27 Coronavirus: Smartphone app to facilitate contact tracing to be rolled out, HSE says
28 Coronavirus: Ireland suffers highest daily death toll
29 ‘Essential’ Covid-19 staff include those supplying food and financial services
30 Coronavirus: Spain’s death toll rises by record 838 overnight to 6,528
31 Gardaí seek public help in tracing girl (14) missing from Co Meath
32 A bean burger from the cans at the back of the press
33 Coronavirus in Uganda: ‘Before the sickness comes to kill us we will die from hunger’
34 Coronavirus: The list of businesses allowed to stay open under new measures
35 The chickpea stew that broke the internet in the US is here. Give it a go
36 Russia closing its borders as Covid-19 numbers accelerate
37 Fintan O’Toole: We are learning how much we rely on low-paid workers
38 Coronavirus: ‘We are not here to go and hide in the Garda station’
39 ‘Coronabonds’ row could endanger the European project
40 Dublin software company Workhuman ‘on course’ for €1bn valuation
Real news has value SUBSCRIBE