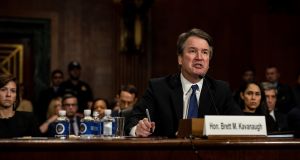 Sometimes, the eye snags on minor details like a coat-tail caught in a briar. Last week, Donald Trump’s Supreme Court nominee Brett Kavanaugh produced for the Senate judiciary committee his calendar for the summer of 1982. It records in laconic scribbles his engagements during the period when Christine Blasey Ford says he tried to rape her at a party.

Many of these notes are archetypally American, words the rest of us learned from movies about teenagers in high schools: “Grounded”, “Prom”. But for May 8th the entry says “Gaelic Football 11:00 / PROM Donny Drives”. And for May 14th, it reads” “GROUNDED GO TO ST. MICHAEL’S / Gaelic Football 3:00 / NIKKI AT BEACH”. Gaelic football, our very own little marker of Irish identity: Sweet Jesus, this snarling, hysterical, entitled man is One of Us.

2 Dara Ó Briain reveals his quest for his birth mother: ‘She said there was no choice in this’

3 Life under Level 4: What restrictions will look like if lockdown is eased

5 Jon Bon Jovi: ‘That whole lifestyle was so vapid. I couldn’t wait to get away from it’

8 Mayo's Clare Island one of State’s most infected communities

9 First-time buyer in 2021? Here’s how to avoid rookie mistakes

13 Donnelly admits unlikely 700,000 people will be vaccinated by end of March

15 Mairead McGuinness: They don’t call me ‘Elbows McGuinness’ to my face

17 Covid-19: International travel may not be possible by Christmas – Varadkar

18 Restrictions may be eased to Level 4 after March 5th, Varadkar says

19 We must ask obvious question over shooting of George Nkencho

20 Gardaí believe teenager was not initially involved in disturbance

21 When will we travel again? Nobody knows

24 GameStop focus of war between Wall St and small investors

25 Karlin Lillington: Why were groundless doubts on vaccine retweeted by believers in fact?

40 Oscar Wilde, my grandfather, ‘talked himself into prison’