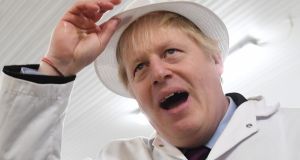 Thanks to the marvellous Jennifer Arcuri, with whom he had a long dalliance, we now know that Boris Johnson’s seduction techniques include the acting out of some lines from Shakespeare’s comedy Twelfth Night. “He was hilarious,” she told ITV, “because he would read it. ‘Will you hoist sail sir? Here lies your way’.” The weird thing is that this passage so neatly summarises Johnson’s other attempted seduction – his wooing of traditional Labour voters.

What’s going in Shakespeare’s scene is that an imposter is trying to deliver a message full of ridiculous bombastic flourishes. Cesario, the would-be messenger, is a complete fake – he is actually a woman dressed up as a man. Olivia, to whom the seductive letter is to be delivered, reckons that the bravado and grandiloquence suggest that something fishy is going on and that the sentiments are “more like to be feigned”. Speaking for those in the English midlands and north who have had Johnson’s dubious charms visited upon them, she tells Cesario: “I heard you were saucy at my gates and allowed your approach rather to wonder at you than to hear you.” He must, she thinks, “have some hideous matter to deliver” if he wraps it up in such palaver.

6 Beyond the guidelines: How not to get Covid-19 this weekend

10 Remote-working ‘revolution’ bringing people back to towns and villages

12 Sharing a car? Here’s which windows to open to lower the risk of coronavirus transmission

13 Miriam Lord: Healy-Rae scooting around and giving the Honda 50 a run for its money

14 The stigma attached to illegitimacy was not exclusively Catholic

15 ‘Try and keep me out’: Biden officially invited to visit Ireland

19 ‘I should be feeling despondent. I don’t’: Chefs dish up the truth about life in lockdown

21 Can five minutes’ exercise a day make you fit?

23 Covid-19: We've made substantial progress but are a long way from where we need to be

25 The chickpea stew that broke the internet in the US is here. Give it a go

26 ‘Doug and Kamala together are almost vomit-inducingly cute and couply’: The VP’s stepkids speak

30 Joanne O'Riordan: Why I want to live a bit more like Ted Lasso

31 Cliff Taylor: Travel restrictions to toughen as another year of staycations looms

33 A Kerala Kitchen curry for the weekend

34 Cold and working from home? How to stay warm without whacking up the heating

36 Essex lorry deaths: Members of Irish-Romanian gang jailed for up to 27 years

37 Coronavirus search: See how Covid-19 is spreading in your area