Fintan O'Toole: Boris Johnson is the fool who would play the king

Boris Johnson has received 114 out of 313 votes in the first poll to succeed Theresa May as Conservative leader, comfortably topping the poll ahead of his nearest challenger Jeremy Hunt on 43. Video: Reuters 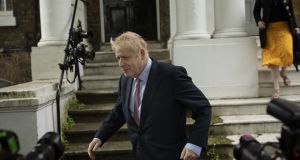 Boris Johnson embodies more than anyone else the weirdly performative nature of Brexit as a jolly jape with real and awful consequences. Photograph: Dan Kitwood/Getty Images

If lies were flies, the swarm around him would be so thick that Boris Johnson would be invisible. His gruff, mock-jovial Etonian tones would be drowned out by their incessant, deafening hum. There is ordinary political lying – evasions, circumlocutions, omissions, half-truths. And then there is Johnsonian lying – bare-faced, full-throated, unabashed. I wonder is this the real mark of how far British political life has fallen: people are so sick of the first kind of dishonesty that they actually find Johnson’s upfront mendacity refreshing. Is this the only kind of authenticity some of them can now imagine: the honest liar whose fabrications are unadulterated by any vestigial belief that truth even exists?

When Johnson was Brussels correspondent of the Telegraph, his colleagues from the rest of the British media made up a version of Hilaire Belloc’s Matilda in his honour: “Boris told such dreadful lies/ It made one gasp and stretch one’s eyes./ His desk, which from its earliest youth/ Had kept a strict regard for truth,/ Attempted to believe each scoop / Until they landed in the soup.” He got away with it, of course, because mostly what he lied about, in public at least, was the European Union. Even for once-respectable Tory papers such as the Telegraph, the EU has always been a free-fire zone. The rules of engagement are different – minimal respect for facts is not required.

1 Mary Lou has to call for the smelling salts as SF councillor deals a knock-out blow
2 Dublin gangland figures involved in Drogheda feud that killed 17-year-old
3 Who was murdered teenager Keane Mulready-Woods?
4 Murdered and mutilated: Keane Mulready-Woods and the teenagers of gangland
5 St Michael’s conveyor belt showing no signs of slowing down
6 Patrick Freyne: The mystery of Dermot Bannon and his many surrogate wives
7 Fintan O’Toole: Ten big questions for incoming politicians
8 Stockton’s Wing still defying convention 40 years on
9 David McWilliams: Introduce a congestion charge and make public transport free
10 Murder inquiry after Cork student stabbed in neck at house party
11 Government accused of ‘losing control’ following shootings and stabbing
12 Teenage boys and organised crime gangs: A complicated dynamic
13 ‘Life in Vilnius reminds me of Ireland in the 1990s’
14 Dublin housebuilder records €11m gain after striking deal with bankers
15 Suspects arrested as two men badly injured in Dublin double shooting
16 Netflix: The best 101 films to watch right now
17 Welcome to Iten in Kenya – home of champions and cheats
18 Terry Gilliam: ‘Adam Driver is either an idiot or the last pure-hearted person out there’
19 Munster mood will be determined before kick-off
20 Ross O’Carroll-Kelly: I hate my father-in-law the same way dogs hate lampposts
21 The Roscommon man who became a sumo wrestler in Japan
22 Real price of cheap credit? Unaffordable homes
23 Brianna Parkins: Being Australian means knowing the land you love could kill you
24 Drogheda feud timeline: main events so far
25 Boeing identifies new software flaw in grounded 737 Max
26 Our dream home came on the market. Then a nightmare followed
27 Saracens to accept second 35-point deduction and effective relegation
28 Barclays to cut 100 senior roles as lender seeks to rein in costs
29 Varadkar-Martin contest to dominate election, FF and FG say
30 Destitute in Dublin: ‘You are vulnerable in a tent. Nowhere is safe’
31 Chris Hadfield on the climate crisis: ‘The world has seen much, much worse’
32 Want to be a ‘rewilder’? Here’s how
33 Phil Hogan’s task deepens as trade becomes politics
34 Immigration campaigner revokes bequest to UCC over Khan family support
35 Sex Education on Netflix: More antiseptic and untitillating sex scenes. How off-putting
36 Life in Brexit Britain: The message is clear – fit in, or get out
37 Family of murdered teenager were sent video purporting to show killing
38 Can you identify this beautiful fungus? Readers’ nature queries
39 UK Labour Party leadership race: The five contenders
40 Most secondary schools to close for day in pre-election strike
Real news has value SUBSCRIBE