Fintan O’Toole: Biden can make America great again only by making it green

Donald Trump boasted of not having started a war. But he did: a war on nature 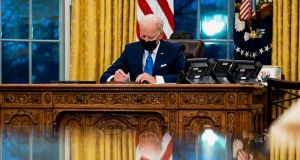 There is one respect in which Donald Trump’s administration was not chaotic but efficient, organised and relentless. The former US president and his backers were very serious about climate change and the environment. Denying the first and destroying the second were the closest Trump came to a coherent programme for government.

This was not just about negative acts such as pulling the United States out of the Paris climate accords, or refusing to face up to the transformations necessary for human survival. It was a systematic undoing of the progress that had been made over the previous decades.

3 Covid-19: We have never seen a pandemic of this scale that was shorter than 2-3 years

8 Owen Doyle: Calamity in Cardiff is hard to get your head around

15 All Creatures Great and Small: Who was the real James Herriot?

20 Dublin most popular city for Brexit relocations by financial firms

22 Bill Gates: ‘I’m not trying to take anything away from Greta Thunberg, but...’

23 A musician’s suicide: ‘Gar would be alive today if there wasn’t a pandemic’

24 Fintan O’Toole: State's political system has failed to adapt to demands of dealing with Covid

27 How Enter The Dragon became a martial arts phenomenon

28 What’s the oldest woman you’ve delivered a baby to, I ask the doctor. Fifty-two, he says

35 ‘You have to get up that morning and lace those shoes – words don’t teach, life experience does’

36 Pandemic means religion for religion’s sake is gone. That’s not a bad thing

38 How to make your own spice blends at home, from Chinese five spice to Middle Eastern zaatar