Why has Save the 8th hired consultant at heart of Trump-Mercer-Brexit data nexus? 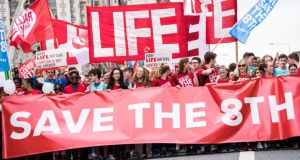 Save the 8th: the anti-abortion group has hired Kanto, a British data-analytics and political-campaigning company run by Thomas Borwick. Photograph: save8.ie

If you like my stuff you’re an ignoramus. Many people would agree with this as a general proposition, but I mean it in a more specific sense. If you’ve ever liked or shared one of my columns online, data-analysis firms probably identify you as a hopeless lefty liberal. And you will therefore be ignorant of the big social-media campaign against the repeal of the Eighth Amendment to the Constitution, which bans abortion in almost all circumstances. That campaign will be modelled on those that helped both Donald Trump and Brexit to victory. It will use microtargeting to direct specific messages to those who can be most easily swayed by them. You won’t see them – and as things stand Irish regulations will do nothing to control them.

The Brexit referendum and the Trump campaign have shown in the starkest terms that we are no longer in the era of national democracy. The online space in which the opinions of increasing numbers of voters are formed is unbounded. Russia can target voters in Ohio. So can a UK-based digital-campaigning firm like Cambridge Analytica. An obscure data firm in Canada, AggregateIQ, can target voters in Sunderland. (I see, by the way, that AggregateIQ has now removed from its website a quote from the director of the Vote Leave campaign, Dominic Cummings: “Without a doubt, the Vote Leave campaign owes a great deal of its success to the work of AggregateIQ. We couldn’t have done it without them”.)

It would be naive to think that this kind of influence will not be brought to bear on the Irish abortion referendum. We already know that a UK-based data-analytics and political-campaigning company, Kanto, has been hired by the Save the 8th campaign to help persuade Irish people to vote against repeal. Kanto is headed by Thomas Borwick, son of the former Tory MP Victoria Borwick. It is hard to think of a single person who better embodies the transatlantic nexus of right-wing digital influencers.

Borwick is an alumnus of the now notorious Cambridge Analytica, which is owned by Robert Mercer, the billionaire Trump ally who also funds the far-right website Breitbart. Borwick was also a consultant to Cambridge Analytica’s parent company, SCL Group. And Borwick was technology director of the Vote Leave campaign, which spent more than half its entire budget with AggregateIQ, as well as the sole shareholder of Voter Consultancy Ltd, which came to prominence in Britain last November, when it used highly targeted Facebook ads to urge protests against specific anti-Brexit Tory MPs. Taking us back across the Atlantic, these ads were placed on behalf of a shadowy Florida-registered organisation called Brexit Realities. Borwick has also recently formed a company called (I kid you not) Disruptive Communications Ltd with the former Ukip MP Douglas Carswell.

And hiring Borwick to create and manage a website is like employing the SAS to run security at a school hop or bringing in Einstein to tot up your shopping bill. He seems awfully overqualified for the job. There are probably thousands of people in Ireland who could create a campaign website that would allow McGuirk and his colleagues to tell, as he puts it, whether “600 people from Tipperary are logging on”. I am sure there are highly motivated anti-abortion idealists who would even do this for free.

Why does Save the 8th need to bring in the person who ran the Brexit operation, one of the most successful campaigns of digital persuasion yet seen?

So why do you need to bring in the person who ran the Brexit operation, one of the most successful campaigns of digital persuasion yet seen? How do you just happen to hire someone who is right at the heart of the Trump-Mercer-Brexit data-manipulation nexus? If the anti-abortion campaign can really afford this kind of overkill, we can also expect every Save the 8th leaflet to be delivered to our doors on a silver platter by a liveried courier riding a white charger.

But assuming that Save the 8th really has no intention of using the dark techniques that were so successful for Trump and the Brexiteers, the certainty is that someone else will. The Irish vote matters deeply to the hard right internationally. The Eighth Amendment has always been a model for what it wants to see elsewhere, especially in the United States. Money will be no object – as the main anti-abortion website LifeSite News asks in a fundraising appeal attached to an article posted last week, called Will Ireland Rise Up and Do Battle for the Unborn? “Can you donate just $10 for PRO-LIFE? Every person you help reach becomes equipped to engage in the culture war.” The firestorm of fake news is coming. We need to know what plans the Government has to ensure a free and fair vote.