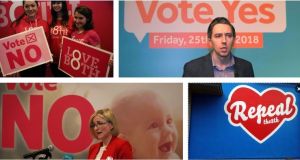 The referendum on the Eighth Amendment will be held on May 25th.

I’m not sure people who want to defend the Eighth Amendment to the Constitution know how extreme their position is. Extreme, that is to say, not by the standards of those of us who always opposed it and would like it to be repealed, but even by the standards of mainstream social conservatism.

The Eighth is, in one crucial respect, on the lunatic fringe of anti-abortion activism. This is because, as has been made clear in recent years, it does not merely outlaw abortion in all but a very small range of circumstances. It does something else, something that most sensible conservatives regard as repugnant – it demands severe punishment for women who have abortions. There is no way around this: while the Eighth is in place, Ireland is committed to treating abortion, not just as a moral wrong, but as a crime more serious than, for example, child rape.

1 US election: ‘Trump would not be caught dead here unless he wanted our votes’
2 First full moon on Halloween night since 1955 will be rare ‘blue moon’
3 The real Contagion virus is out there and it’s causing virologists to worry
4 Trump vs Biden: stakes are high for the Irish economy
5 Five nursing homes receiving ‘intensive’ State support as they battle serious coronavirus outbreaks
6 Man found guilty of murdering girlfriend during drinking session
7 New Zealand votes to legalise euthanasia in referendum
8 Shane Ross’s ‘naked attention-seeking’ was with us all week
9 Cork shootings: Father and sons to be buried in two separate funerals
10 Million Pound Cube: The answer to fast cash before Britain collapses into a barter system
11 I wanted to learn more about how sex gets better with age, but my battery was running out
12 Ronan O’Gara: Ireland need to be braver than usual ‘in a shoot-out for gold’
13 Two hundred Irish retailers for all your online Christmas shopping
14 Postmortem results on mother and two children found dead in Dublin due on Friday
15 ‘Clothes are not essential’: Damien English defends retail restrictions
16 Majority of Irish Covid-19 cases come from variant that originated in Spain – study
17 Coronavirus: Ballyjamesduff in Co Cavan over 5 times the national incidence rate
18 Cosy and colourful: this Wicklow cottage is a décor delight
19 Jackie Tyrrell: We’ve got the championship back. But where’s the physicality?
20 Travel advice for Christmas to be given at the end of November, says Taoiseach
21 Kennedy Wilson sells Baggot Plaza for $165m
22 AIB reports better than expected results in face of Covid, income drops 11%
23 Study finds retail workers serving customers have fivefold risk of Covid-19
24 The Movie Quiz: Maureen O’Hara was raised in which leafy Dublin suburb?
25 Kanturk farm shootings: A timeline
26 Coróinvíreas and arán banana: A new English-Irish dictionary covers the pandemic
27 France v Ireland: Ireland player profiles
28 Tighter regulations for car makers will drive buyers to choose electric
29 New evidence emerges in shooting dead of teenager in Belfast in 1972
30 Coronavirus: Let’s not do the same thing and expect a different outcome
31 Suzanne Lynch’s US election diary: All eyes on the midwest battlegrounds
32 Irish forestry ‘net emitter of greenhouse gases’
33 The perfect traditional Irish barmbrack
34 Stephen Collins: Common sense must prevail in Brexit fisheries row
35 Mother and baby homes report will increase calls for State redress, Cabinet told
36 Aer Lingus owner IAG slashes costs to survive Covid chaos
37 Unanimous or unfair? Opinions divided on Sam Bennett’s Vuelta relegation
38 Thinking behind the National Archive needs to be revised
39 France v Ireland: French player profiles
40 Football 2020: It’s a knockout revisited – ‘You played, you lost, you went home’
Real news has value SUBSCRIBE