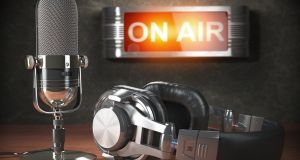 If there really is a heaven somewhere, complete with pearly gates, I suspect that new arrivals will be welcomed there to the trumpeted strains of Galliard Battaglia by 17th-century German composer Samuel Scheidt (which, incidentally, is not a surname you want to mention in polite conversation).

This is because, for as long as I can remember, that tune has been the backdrop of Sunday mornings, thanks to Sunday Miscellany, the RTÉ Radio 1 programme that uses it as a signature.

It stretches back into my personal mists of antiquity, the 1960s. And I know it’s the soundtrack of eternity because it has since outlived even The Lark in the Clear Air, as used by Mo Cheol Thú, long the other accompaniment of Sunday, which also once seemed to have lasted forever but retired with Ciarán Mac Mathúna in 2005, after a mere 35 years.

So in one way it’s surprising to find that Sunday Miscellany is only 50, as of last month, because even in childhood I must have assumed it had always been there. Of course we were only ever half-listening to it then. In our house, it had to compete with the noise and chaos of seven children, some of us high on shoe polish, being got ready for Mass.

But even when it was quiet, as at Mass, you didn’t pay much attention to the actual readings. It’s only the voices from those early shows I remember now: a mosaic of accents ranging from the spiky East Belfast of Sam McAughtry to the West Cork English (but mostly English) of Daphne Pochin Mould, whose name always sounded like something that might happen to your house if the walls weren’t properly insulated.

Then there was Benedict Kiely, the man who more than any other contributor became synonymous with the programme. So musical was his mid-Ulster delivery, he could have read extracts from the telephone directory and you would have been mildly entertained. He could certainly have read from a gazetteer of Ireland: the combination of his voice and the place-names would have been poetry enough.

In fact, place-names were a mainstay of his pieces, which always seemed to be rambles through the countryside of memory, with no planned destination ever. But for the life of me I cannot now recall a single subject he ever talked about. He must have been a broadcasting version of the Latin mass: comforting to listen to, even if you didn’t understand the words.

In general, I struggle to remember the content of any individual contributions over the show’s 50 years. This may well be a reflection on me rather than the contributors, although you would think a programme based (like Joyce’s Dubliners) on personal epiphanies would have left a few indelible impressions.

Not that daily newspaper columnists can afford to criticise: glass houses and all that. I’ve long lost count of the times somebody has told me: “you wrote something very good recently – what was it?”

The mistake to be avoided on such occasions is trying to answer the question, as I did once when a former editor asked me. It can be quite soul-crushing to list the things you thought were were good and find that nobody else noticed.

Speaking of glass houses, the problem with epiphanies is that you can be a long time waiting for them to occur naturally. If you’re a regular column writer or Sunday Miscellanist, you could be out of a job before the next good one comes along. So as with tomatoes or rhubarb plants, you have to force them occasionally, to the detriment of flavour.

That may have been a failing of Sunday Miscellany at times. Even so, it’s remarkable that any programme should have survived as long, never mind one so unadorned with tricksy production values as this one.

According to the archives, it took a sabbatical for a few months once, in 1973.

Otherwise it has been ever-present on Sunday mornings since 1968, always in the same time slot, between 9am and 10. Even Mass has been reduced to offering consumers a Saturday night option in that period.

The milestone is being rightly celebrated this weekend, with a three-day festival at the Project Acts Centre in Dublin. The venue will include a “Miscellany50 Lounge”, admission free, featuring a soundscape of former contributors including Maeve Binchy, Nuala Ó Faoláin, Seamus Heaney, and the inevitable Kiely. There will also be five live shows, each marking one of the decades past, and recorded for broadcast throughout 2019, the first year of the programme’s second half century.

1 Conor McGregor stops Donald Cerrone in 40 seconds on UFC return
2 I rationed sex in my marriage for 20 years - but since menopause, my libido has rocketed
3 Harry and Meghan will no longer be working members of British royal family
4 Mary Lou has to call for the smelling salts as SF councillor deals a knock-out blow
5 I’ve handed in my notice and I’m leaving Brexit Britain
Real news has value SUBSCRIBE