Fear in Washington as Trump presidency enters its final weeks

Even if Trump’s worst instincts are kept in check, the GOP is in a dangerous place

US president Donald Trump pressured Georgia's top election official to "find" enough votes to overturn his election defeat in the state, according to a recording of the hour-long call published by US media. Video: Reuters 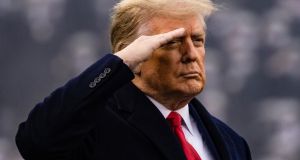 The closing chapter of Donald Trump’s presidency was never going to conclude quietly. After four tumultuous years in the White House, the outgoing president is continuing his attack on the norms of American democracy right up to the end.

With just over two weeks remaining until Joe Biden’s inauguration, Trump is doing everything in his power to stop the inevitable, increasingly resembling an irrational elderly monarch refusing to cede power.

12 ‘Horrendously out of proportion’: Residents set against 19-storey apartments

14 ‘I think my husband has a drug problem, but he says that’s nonsense’

18 Michael Harding: Just after Christmas, I began talking to the birds

19 Joe Biden can bring either unity or change – not both

20 Range Rover Sport D350: Fab to drive. But everyone you pass will hate you

24 The chickpea stew that broke the internet in the US is here. Give it a go

26 Kathy Sheridan: Pandemic is reminder of poison in British and Irish politics

27 Róisín Ingle: The gin is now part of my daily routine

37 AIB and Irish Life in advanced talks on joint venture

38 A sizzling recipe to convert the sceptics