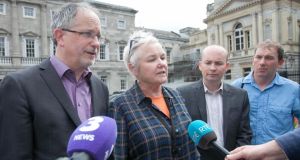 The alternative left, like all populist movements, relies on the contrivance of perpetual conflict between those they seek to portray as “ordinary citizens” and “the elites”. Appreciating their need to do so helps one understand why they get so exercised about what is said about them in publications such as this newspaper.

The footprint of The Irish Times in the sectors of the electorate in which the alternative left seeks to thrive must be relatively small yet their spokespersons spend much of their time and efforts on media and social media obsessing about and criticising how they are covered here. At one level it reveals the middle-class reading habits and origins of some of their most prominent leaders. At a broader level, however, their focus and attack on what, like Donald Trump, they characterise as “mainstream media” enables them to talk up the sense of perpetual struggle they wish to generate.

1 Seán O’Brien: Anger over my parents’ break-up never left me
2 Further anti-lockdown protest held in Dublin city centre
3 Sacha Baron Cohen: ‘I had to ring the alarm bell and say democracy is in peril’
4 Couple found guilty of murdering Irish dancer with ‘devil’s breath’ drug
5 We need to reverse our thinking on lockdown
6 ‘I’m sleeping with my ex-boyfriend and want him back – but don’t want to scare him off’
7 When Anthony Clare met ‘calculating, disturbing’ Jimmy Savile
8 Covid-19: Taoiseach warns ‘bumpy roads ahead’ as 859 cases and four deaths reported
9 David McWilliams: Lockdown decision makers still get paid. Those they shut down do not
10 Jennifer O’Connell: No transparency behind swerve into severe lockdown
11 Two hundred Irish retailers for all your online Christmas shopping
12 Why Waterford is ‘the best Covid county in Ireland’
13 How to cosy up your outdoor space this winter
14 Tanya Sweeney: I wish I’d kept my naked pics. I feared they’d end up in the ‘wrong hands’
15 Dermot Bannon: ‘I used to win Lego competitions ... but I lied about my age’
16 Ireland get the job done against Italy to keep alive Six Nations hopes
17 Gardaí find ‘fully operational bar’ after visiting suspected shebeen
18 Phil Hogan has reason to be aggrieved over von der Leyen’s Covid quarantine trip
19 Homeless woman’s courage praised as man jailed for sexual assault
20 Sophia Loren: ‘I never had a relationship with my father’
21 Late Late Show: In Covid-19 Ireland, Tony Holohan is bigger than Bruce Springsteen
22 How Terence MacSwiney’s death led to estrangement between his wife and daughter
23 Fintan O’Toole: Donald Trump’s campaign has a joyful new message – ‘I’m alive!’
24 Lockdown mid-term: what to do, watch and cook this week
25 Pat Leahy: Fiscal reality will halt cycle of lockdowns
26 Sinn Féin ‘summoned’ people to Storey funeral to deliver political message - Taoiseach
27 Ireland 50 Italy 17: Ireland player ratings
28 France warm up for Ireland with impressive win over Wales
29 Q&A: Mother and Baby Homes Commission database
30 Hugo Keenan and Will Connors: The best of friends, the best of debuts
31 Cab investigates behind the massive gates of Chosen Few Motorcycle Club in Dublin
32 Coronavirus search: How is Covid-19 spreading in your locality?
33 TV guide: 23 of the best shows to watch this week
34 Life under Level 5: Where can I go, who can I see, what is closed and what is open?
35 How would a Biden presidency affect Ireland – and the world?
36 Organisation led by survivors of Mother and Baby homes needed ‘urgently’
37 Putting the clocks back: Sleep experts question benefits of not changing time
38 ‘In 2018 I wrote publicly about my heritage. Soon after, the anti-Semitic messages began’
39 Roddy Doyle’s Nurse – an exclusive new short story
40 Pint lovers may be spinning at the notion: Conor Pope tries alcohol-free Guinness
Real news has value SUBSCRIBE