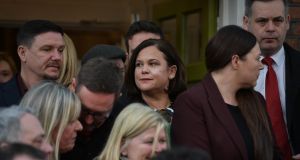 Fresh from an election and a post-election bout of foreswearing any contact with Sinn Féin, Micheál Martin, Leo Varadkar and their supporters have still not fully woken up to the fact that as individuals they have both lost the election.

The fact that our political system has, as a result of the election, fragmented into a three party system means that neither have come under pressure to resign from within their own parties. If our system was normal either or both would be gone or at the very least signalling their departure at this stage. Of course our political system is anything but normal.

After the 2016 election the Independent TD Shane Ross famously referred to then Taoiseach Enda Kenny as a “ political corpse’’ following his meeting with him for the post election discussions on forming a coalition.

While neither Varadkar nor Martin could be referred to as political corpses yet their days, in some sense, must be numbered. Forming a grand coalition with the inclusion of the Greens and independents will only postpone the day of reckoning.

The wolves were already circling for Leo Varadkar before election day. There was something rather crude and ghoulish in Michael Noonan’s endorsement of Paschal Donohoe as a future leader before a single ballot had been cast in election 2020. Simon Coveney will presumably also be a future contender.

Despite the predicament both of the previously big parties find themselves in they continue with the election rhetoric of outright condemnation of Sinn Féin. It is virtue signalling of a most disastrous kind.

The inclusion of left leaning populists in Greece (Syriza) and in Italy (Five Star) in government led to their electoral demise, not least because the much hyped promises could not survive full contact with the fiscal realities of being in office. Excluding Sinn Féin simply allows them to grow further in a snowstorm of outlandish promises. The moral imperative should be to include them not exclude them at this stage.

The exclusion and attempted marginalisation of Sinn Féin is not just replete with hypocrisy but also bad politics. It reduces the options for both Fianna Fail and Fine Gael. Fine Gael it must be remembered ruled out Democratic Left in 1992 as a government partner only for John Bruton to eat his own words less than two years later and pop them into his rainbow coalition. There was of course talk of shadowy figures in the background running the Workers Party also. A simple fact of life in Irish politics is that revolutionary supporters of violence ( FF, the Workers Party and Sinn Féin) have a history of succumbing to the appeals of parliamentary action.

Fine Gael has always seen itself as a law and order party so there might in fact be a logical justification for them in ruling out Sinn Féin in terms of their direct party membership and wider support base. For Fianna Fail to do so invites accusation of hypocrisy and a closer examination of its own previous history as a party whose founders took arms in a bloody civil war against the new born state. Fianna Fail despite its origins in violence against the state was encouraged to come into the Dáil with William T. Cosgrave recognising that it was not good for the democracy itself to have a grouping of this kind excluded from parliament.

The irony of the Fianna Fail leadership stakes ( post Micheál Martin) is that two of the most obvious contenders Jim O’Callaghan (Dublin) and Micheál McGrath (Cork) have been the most outspoken advocates of not going into government with Sinn Féin thus potentially, at least, limiting their own future options should their ambitions be satisfied.

Micheál Martin might have wished they were less vocal when they were but he cannot object since it was he himself started the whole run on Sinn Féin. Most sensible military and civilian minds try to avoid a war on two fronts. Fianna Fail appears to have fought election 2020 with two enemies in mind - Fine Gael and Sinn Féin. They might have done better if they had focused on one.