Election 2020: Greens and Labour can hold key to which big party leads government 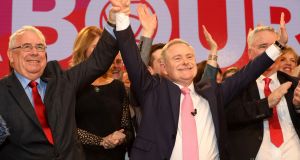 Brendan Howlin’s blistering attack on Leo Varadkar at Labour’s party conference was the clearest signal yet that his preference is for a coalition deal with Fianna Fáil after the next election. Photograph: Leah Farrell/RollingNews

The contest between Labour and the Greens as to which of them is the bigger party after the next election is likely to have an even bigger impact on the policy direction of the next government than the battle between Fine Gael and Fianna Fáil about who will lead it.

While all parties are desperately trying to get in tune with the times by committing themselves to a green agenda, and proclaiming that climate change is the great issue of the day, the Green Party has obviously better credentials on the issue than anybody else.

1 A Ryan Tubridy interview takes a terrifying twist
2 Dublin house deaths: Three young children named
3 Returning from Australia, I barely recognise my hometown
4 Thousands march in Drogheda to ‘take back control’ from drug gangs
5 Des Bishop: ‘The last time my mother spoke was to say sorry’
6 Irish explorer who discovered Antarctica honoured in home village
7 Community in shock after three children die: ‘It is just horrific’
8 Brexit is a collective English mental breakdown
9 Renters on housing crisis: ‘We’re f**ked basically’
10 David Clifford sends everyone back to their corners unbeaten
11 Corey Taylor: After 20 years in Slipknot we are all beat up
12 Shane Ross breaks fingers in fall at Marlay Park
13 Whatever happened to Choupette, Karl Lagerfeld’s pampered cat?
14 David McWilliams: A fall in house prices should be our goal
15 Xi declares ‘grave situation’ as China’s coronavirus death toll at 41
16 A vegetarian and a non-drinker visit Ireland: here’s their verdict
17 Auschwitz 75 years on: The Holocaust’s toll for one Dublin family
18 Sable kept as pet in Co Cork found to have rabies-like virus
19 Cycling or swimming, walking or yoga: What is the best exercise for you?
20 Some get up early to go to the gym, others because they slept in a doorway
21 Simon and Garfunkel for people who don’t like Simon and Garfunkel
22 Opioid executive admits to ‘no morals’ ahead of prison term
23 World’s first bicycle ride took place 200 years ago
24 Ireland’s housing crisis in five revealing graphs
25 The untold story of River Phoenix, 25 years after his death
26 The dark side of the white stuff
27 NI businesses fear burden of post-Brexit red tape on goods transport
28 Planning a move to Canada? Here’s everything you need to know
29 Adam Driver: ‘There’s a double standard for men and women’
30 Six Nations: Ireland are contenders but England still the team to beat
31 Man appointed as executor of €5.1m estate should be replaced, court rules
32 Can the State afford to roll back on the ‘pensions time bomb’?
33 Science of kissing: why a kiss is not just a kiss
34 EU banking watchdog describes rejection of Cross nomination as ‘unfortunate’
35 Owen Doyle: Creeping professionalism of schools rugby a threat to the game
36 ‘My partner lasts only a few minutes in bed. Any advice?’
37 James Durcan steals a draw for Mayo in Ballybofey
38 Witchipedia: Ireland’s most famous witches
39 South Dublin Credit Union members urged to borrow more to ensure survival
40 Irish conductor the first woman to lead orchestra at Oscars
Real news has value SUBSCRIBE