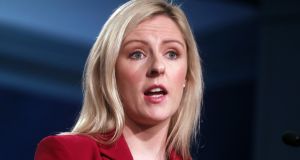 Fianna Fáil’s Lisa Chambers, who lost her Dáil seat in the general election in February, was elected to the Seanad this week. Photograph: Leah Farrell/RollingNews.ie

The Seanad election has seen Fianna Fáil retain its position as the largest party in the Upper House, followed by Fine Gael with Sinn Féin, Labour and the Greens also winning seats. Assuming that Fine Gael and Fianna Fáil can agree a coalition, they will be assured of a solid majority with the nomination of the taoiseach’s 11 appointees. That needs to happen soon as any new legislation that may be required by the health emergency cannot be passed by the Oireachtas until the Seanad is constituted.

One of the talking points about the Seanad result is the fact that none of the Fine Gael women candidates won seats despite an injunction from Taoiseach Leo Varadkar to his councillors to support women. He should have an opportunity to compensate for that with the Taoiseach’s 11, assuming the appointments are shared between Fine Gael and Fianna Fáil.

Inside Politics · ‘Phase Two Plus’ and decision time for government formation

Overall, the number of elected women senators has increased from 12 in the outgoing chamber to 14 this time. At around 30 per cent of the senators elected it is still not good enough but it is a bit better than the situation in the Dáil where the percentage of women elected was just 22 per cent. The election of four Labour senators, three of them women, is an important achievement for the party given that none of its women candidates were elected to the Dáil. The 10-member parliamentary party will now be a stronger force in the Oireachtas.

One of the features of the new Seanad is that Independent councillors have flexed their muscles and elected the biggest number of representatives on record. They will join the Independent senators elected by the two university constituencies which saw no change in personnel. One important question is whether Seanad reform will come back on to the agenda. There have been 14 separate reports on the issue over the past 80 years but one after another has gathered dust. The last Seanad discussed the feasibility of implementing the most recent of those reports, drafted by former leader of the House Maurice Manning. Don’t hold your breath.

1 Former Kilkenny hurler dies after bike struck by tractor
2 Why you still can’t have a European holiday this summer. Or can you?
3 Can I eat, drink, hug? How to visit a person’s house safely from June 8th
4 Kenneth Branagh: ‘It’s a challenge, Irishness in cinema’
5 How an exercise programme facilitated the spread of coronavirus
Real news has value SUBSCRIBE