Facing a severe crisis, the new administration must show energy and political ability from the very beginning 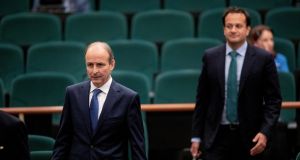 There are some surprise promotions and a number of unexpected omissions in the new Government but the overall impression is of a potentially vigorous administration which combines experience with enthusiasm. Given the scale of the challenges facing the country it will need to show energy and political ability from the very beginning. It will also need a healthy dollop of good luck.

Taoiseach Micheál Martin now faces the challenge of his political life. He has considerable experience in cabinet between 1997 and 2011 in a number of senior portfolios and has been a successful party leader, bringing Fianna Fáil back from near extinction in 2011 to leading a three-party government in 2020.

He will need to call on every ounce of his political experience to steer the coalition through the next two and a half years.

Often accused of indecisiveness, the new Taoiseach took some bold decisions in the appointment of the Fianna Fáil ministerial team. He promoted the newly-elected Norma Foley to the cabinet as Minister for Education and gave the health portfolio to Stephen Donnelly, who only joined Fianna Fáil in 2017, having been a Social Democrat TD and prior to that an Independent.

The appointments of Michael McGrath, Darragh O’Brien and Barry Cowen were expected but the failure of some prominent Opposition front benchers to make the cut was a shock. One striking feature of the new cabinet is that Fianna Fáil has bravely taken on two of the most difficult and challenging ministerial posts, housing and health, which posed so many difficulties for the last government.

The Fine Gael side of the Cabinet team is less surprising with Leo Varadkar, Simon Coveney and Paschal Donohoe retaining senior positions. Simon Harris managed to hold on and Heather Humphreys is another who earned her place at the top table. The elevation of Helen McEntee to Justice is a justified promotion, given her performance on Brexit, but the Department is a minefield for a first-time cabinet Minster.

Green Party leader Eamon Ryan will be one of the most powerful members of the Cabinet with a huge portfolio combining energy and transport, two key areas for important climate change decisions.

Catherine Martin’s six-handed brief is a bit of a rag bag but Roderic O’Gorman has an important job to do promoting the equality agenda and looking after the disability sector.

The appointment of one of the country’s leading barristers, Paul Gallagher, as Attorney General is significant. In that post during the financial crisis he played a vital role in helping to rescue the country from financial disaster and his experience will be invaluable in a Government with eight first-time cabinet ministers.

1 Tony Holohan to step back from role as chief medical officer
2 John Cleese has a faulty sense of humour about the Irish
3 Pygmalion pub mired in weekend social distancing row
4 Why are markets booming when a crash is on the way?
5 Bobby Storey: The IRA's planner and enforcer who stayed in the shadows
Real news has value SUBSCRIBE