The Irish Times view on the Museum of Literature Ireland: a well-merited honour

James Joyce was unafraid of exile, even embracing the heroic outsider status he felt his rejection of Ireland bestowed on him 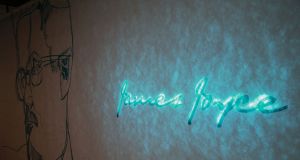 Ireland has shown itself ready to celebrate Joyce and the opening of the new Museum of Literature Ireland (MoLI) at 86 St Stephen’s Green this week. Photograph: Nick Bradshaw

In January 1899, at 86 St Stephen’s Green, two student debaters from University College Dublin defeated a motion at the Literary and Historical Society which asserted that contemporary English literature had “reached a very low ebb”. One was Tom Kettle, who was to become an Irish Parliamentary Party MP before dying at the Somme in 1916. The other was his friend James Joyce, who would make his own outstanding contribution to English literature from European exile in Trieste, Zurich and Paris.

At UCD, Joyce studied English, French and Italian, also teaching himself Norwegian and German to read authors he admired in the original. Like many students at the time, he frequented the National Library, which provided both intellectual stimulation and refuge from a home which his father’s heavy drinking rendered uncongenial. After graduation, he thought the university might employ him and ascribed its failure to do so to alarm at his atheism, though it could also be attributed to his mediocre degree.

1 Aaron Brady found guilty of capital murder of Det Garda Adrian Donohoe
2 Covid-19 in Ireland: Colour-coded response set to replace phases
3 Donald Trump immediately targets Kamala Harris in campaign video
4 Brianna Parkins: Staycationing just means paying through the nose to sleep in someone else’s uncomfortable bed
5 Covid-19: Restrictions an attempt to prevent State going back to ‘beginning’
6 Moving in and out of lockdown is a recipe for economic disaster
7 Michael McDowell: Free the Shelbourne Four from ‘woke’ activism
8 New Zealand considers freight as possible source of new Covid-19 cluster
9 Sunny spells forecast with high temperatures of 26 degrees
10 Ireland among countries urged to consider reinstating Covid-19 restrictions
11 Coronavirus: Australia suffers deadliest day of pandemic
12 We emotionally reticent Irishmen would be even worse without sport
13 General Motors deprived of rising star after CFO’s surprise move to Stripe
14 A new species of dinosaur discovered on the Isle of Wight
15 Kamala Harris Is the Future, So Mike Pence May Well Be History
16 Madigan’s primary goal is Ireland caps after switch to Ulster
17 ‘I’m afraid an intimate photo may be used to blackmail me or be sold to a porn site’
18 Standoff ensues over Minister’s unavailability at Covid committee
19 Seat’s new Leon: It’s now better than the VW Golf it’s based on
20 Seán Moran: It won’t take much before cancelling All-Ireland looks like a solution
21 AIB concedes Covid mortgage policy was ‘regrettable’
22 ‘I’ve been sleeping with my girlfriend’s sister. I need help. What do I do?’
23 Kamala Harris an assured performer but past record faces scrutiny
24 Irish Michelin two-star restaurant to sell kebabs and fries from takeaway trailer
25 My sporting disappointment: Battered, bloodied, broken by The Wall
26 Lowest numbers in two weeks as one more Covid-19 related death and 35 new cases reported
27 Harvey Norman targets Irish property developers
28 Russia set to begin Covid-19 vaccinations within weeks
29 Covid-19 testing under scrutiny after meat factories and creche affected
30 Northern Ireland-born British and Irish win EU citizenship rights
31 KBC Ireland chief feels heat from big tech in race for relevance
32 Revised help-to-buy scheme opens for applications
33 Let us pursue the coronavirus - not just watch its R number wax and wane
34 An Garda Síochána criticised for Irish-language law non-compliance
35 Objectors stall production of enough timber for 1,000 houses
36 British economy slumps into recession after record drop in quarterly output
37 Run, don’t walk, to nab the best makeup collection of the summer
38 The Irish Times view on resurgence of Covid-19 in Europe: adapting to the new normal
39 Government gives go ahead for €12m fund to help enterprise centres
40 Majority of parents believe children now face mix of classroom and home schooling
Real news has value SUBSCRIBE