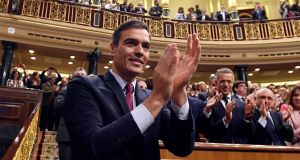 Spain ended 10 months of caretaker governments, punctuated by two inconclusive elections, with parliament’s confirmation of Pedro Sánchez as prime minister this week. Hopefully this decision augurs well for a country that has been plagued by unstable governments, the Catalan crisis, and the mobilisation of the extreme right, over the last four years.

However, it was hardly auspicious that Sánchez was not heeded when he appealed to the opposition to tone down the “toxic climate” of the debates preceding his investiture. He faces an exceptionally difficult task in keeping afloat Spain’s first coalition government since the fractious 1930s. The composition of this coalition, coupled with a side-deal with Catalan nationalists, drew fierce denunciation from the Spanish right.

Sánchez is the leader of the long-established Spanish Socialist Party (PSOE). This party has often governed Spain, sometimes very successfully, in the mainstream tradition of the European centre-left. But his failure to win a majority in November forced him to accept the leftist Unidos Podemos as coalition partners. This party combining a new kind of anti-austerity movement with a reformed sector of the Communist Party.

The prospect of Marxist and republican ministers in a Spanish government was alone enough to spark fury in the right-wing parties. They compared Sánchez’s coalition to the 1930s left-wing Popular Front, whose government was overthrown by General Franco’s fascist uprising in the Spanish Civil War. Pablo Casado, the leader of the Partido Popular (PP) accused Sánchez of forming “the most radical cabinet in history, at the price of overthrowing the regime”, by which he means the constitutional monarchy established after Franco’s dictatorship in 1978.

The PP was partly the creation of former Francoists, but claims to be Christian Democrat. The right has now split into three parties, including the disturbingly popular far-right Vox. Casado might have been the voice of centrist moderation in the debates. Instead, he appeared to compete with Vox for the most incendiary phrases, singing from a remarkably similar hymn-sheet.

The right’s rhetoric about an “institutional coup”, and “genocidal communists” in a government “approved by terrorists”, is irresponsibly demagogic. The PSOE-Podemos programme simply offers reforms in the classic EU social democratic tradition: raising pensions, public service incomes and the minimum wage.

Sánchez faces the choppiest waters in terms of the ambiguity of his side agreement with the Catalan Republican Left ERC party, which supports independence, and enabled his election by abstaining on Tuesday. He insists he is only engaging in dialogue, but the right argues that he has opened the door to the “dismemberment of Spain”. Sánchez will not enjoy a moment’s respite.

1 One hundred Irish retailers for all your online Christmas shopping
2 Covid-19: Backlog forces HSE to skip calls to thousands of close contacts
3 Michael McDowell: What exactly is the price of accepting this Nphet advice?
4 Suzanne Lynch’s US Election Diary: Trump ‘walks out’ of TV interview at White House
5 ‘Groundbreaking’ direct provision replacement forecast to save millions
Real news has value SUBSCRIBE