The Irish Times view on Spain’s election: Sánchez pays for his hubris 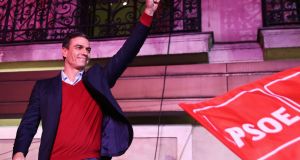 The leader of the Spanish Socialist Party (PSOE), Pedro Sánchez, won Sunday’s general election, but only in the sense that he secured most seats. This caretaker prime minister’s tenuous grip on his troubled country is now weaker than ever.

He was culpably hubristic in driving Spain towards a second election in six months, knowing that the Catalan crisis would erupt again as polling day approached. The very harsh sentences on Catalan independence leaders in September were long foretold. Now Sunday’s vote has left Spain, yet again, with a complex parliamentary spectrum that makes winning a majority a mind-bending conundrum. Another stalemate looms, raising the almost intolerable prospect of a fifth poll in five years. Worse still, this election reveals a dramatically altered political landscape, with the neo-fascist Vox surging from recent obscurity to become the third-biggest party, boosted by the Barcelona riots. A rough beast is, once again, slouching towards Madrid.

Albert Rivera discovered on Sunday that Vox’s authoritarian, racist and sexist rhetoric was much more appealing than his pale, if disturbing, imitation

Vox wants to remove constitutionally guaranteed autonomy from Catalonia and the Basque Country. Meanwhile, Basque and Catalan nationalists increased their seats. The stage is set for a new phase of these perennial disputes. Ciudadanos (Cs), another relatively new party, one deemed a promising experiment a decade ago, has collapsed from almost 60 seats to just 10.

Many Madrid commentators had dreamed of an EU-style centrist alliance between the “Macronesque” Cs and the PSOE. Instead, Albert Rivera led Cs towards the nastier end of the right-wing spectrum. He discovered on Sunday that Vox’s authoritarian, racist and sexist rhetoric was much more appealing than his pale, if disturbing, imitation. He resigned yesterday.

Some are already calling on Sánchez to follow suit. Over the summer, it became clear that he was unwilling to make the compromises inherent in coalition government. He humiliated his natural partners, the leftist Unidos Podemos, in very poorly managed negotiations. He apparently hoped talking tough to the left – and to Catalonia – would harvest votes on the centre-right. Instead, both PSOE and Podemos lost ground.

Sánchez now faces two choices. He could genuinely engage with the aspirations of Podemos, and of Basque and Catalan nationalists. But this would inflame the resurgent Spanish right.

Alternatively, he could seek an unlikely grand coalition with the right-wing and Spanish nationalist Partido Popular. This party has increased its seats, though with Vox breathing down its neck. The PP would demand an even harder line on Catalonia from Sánchez. But that could push the rebels there, who did well on Sunday, from symbolic to actual insurgency. Squaring these daunting circles will require a much wiser approach than Sánchez has been able to demonstrate so far.