The Irish Times view on Sinn Féin’s ardfheis: Edging towards the mainstream 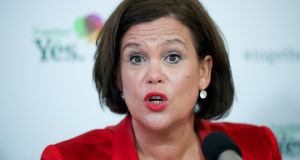 Speculation when Mary Lou McDonald took over as Sinn Féin leader that divisions between the Northern and Southern wings of the party would quickly develop do not seem to have materialised. Photograph: Maxwells

The Sinn Féin ardfheis this weekend will be a defining moment for the party and its new leader, Mary Lou McDonald. When she took over from Gerry Adams in April there were serious questions about how she would cope with the challenge of succeeding a leader who had been in the position for 35 years and whose name was synonymous with the party.

Since then McDonald has established herself firmly in the public consciousness with her powerful and abrasive performances in the Dáil while her high profile role in campaigning for the deletion of the Eighth Amendment to the Constitution gave her the opportunity to enhance her image with the electorate.

McDonald has made no secret of her ambition to lead the party into government in the Republic after the next election and she will be expecting a ringing endorsement for her strategy from the delegates who attend the ardfheis at the Waterfront Hall in Belfast this weekend.

Her declared willingness to go into government with either Fine Gael or Fianna Fáil has helped to shape the political agenda in advance of the election. While the two bigger parties have ruled out such a coalition the fact that the prospect is being widely spoken about and debated in the media has helped to keep Sinn Féin in the headlines. Senior party figures insists that this is more than a publicity ploy and that McDonald has embarked on a clear-cut strategy to present Sinn Féin to the electorate as a party of government rather than a protest movement.

It was interesting that a motion before the ardfheis which set Sinn Féin’s objective as the formation of a left-wing government was amended by the ard comhairle to make it aspirational rather than binding. Convincing voters in the Republic that it can be trusted with government will still be a difficult sell. Suspicion among older voters goes much deeper than doubts about its economic policies. Sinn Féin’s association with the Provisional IRA and the campaign of violence that caused so much death and destruction for decades will not be easily forgotten nor should it be.

On a more practical level the way in which the party collapsed the power-sharing institutions at Stormont almost 18 months ago must give pause for thought about its capacity to cope with the stresses and strains of sharing government with another party with whom it has differences on some fundamental issues.

On the positive side, speculation when McDonald took over that divisions between the Northern and Southern wings of the party would quickly develop do not seem to have materialised. While her unambiguous stance on abortion has led to some internal tensions it has helped Sinn Féin to position itself with the majority of the electorate. Building on that achievement is the challenge ahead.