The Irish Times view on Sinn Féin: New leadership in the spotlight 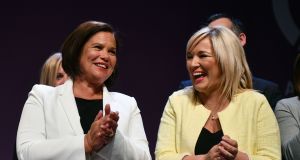 The road from “the armed struggle” to constitutional politics has been long and twisting. North and South Sinn Féin faces hostility rooted in past violence, with a considerable overlay of dislike from parties who see it as an electoral threat. Some are now tempted to believe the threat has gone. Disappointing electoral performance on both sides of the Border hangs over the SF Ard-fheis this weekend.

Part of the problem is presentational. Mary Lou McDonald and vice-president Michelle O’Neill were clearly meant to at least refresh the appearance of the old firm of Adams and McGuinness. But leadership misjudgment dilutes the effect of impressive individual contributions, for example on housing by Eoin Ó Broin.

Brexit has almost reduced McDonald’s rhetoric to demands that Taoiseach and Tánaiste do what they were doing in any case. British government dependence on the DUP has had Northern remainers cheering Leo Varadkar and Simon Coveney.

On the face of it, it was a far cry from the smiles with McDonald at Dublin Castle last year, welcoming repeal of the Eighth Amendment of the Constitution, their placard reading “The North is Next”.

The party makes it harder for itself by still echoing the secretive “movement” it once fronted. Tomorrow’s scheduled election of a vice-president could have demonstrated genuine openness – the first time the post has been contested in decades, potentially at least a striking contrast with the Adams/McGuinness appointment of O’Neill. Instead, challenger MLA John O’Dowd, the Northern party’s feistiest media performer, went silent as soon as he had declared.

O’Neill called him a “comrade” and said she welcomed democratic debate. None took place in public.

McDonald told Tuesday’s Irish News she supported O’Dowd “in his prerogative” but his challenge to her deputy was for “an internal position”. The ardcomhairle, which includes O’Dowd as well as O’Neill, had decided on the “best, most orderly and fair way” for the contest. The tone, plus the challenger’s apparent willingness to be silenced, is unattractive in a party intent on a prominent place in government.

Worst of all for McDonald, the tactic has only fed speculation that the O’Dowd bid is the tip of sizeable discontent with what many see as drift. As one of its most sympathetic Northern observers – Chris Donnelly, a former election candidate – has noted, just when Irish unity is on the agenda as never before the party is winning no electoral benefit and seems becalmed.