The Irish Times view on Áras an Uachtaráin’s finances: transparency is required

The presidency’s funding should be looked at, but not by the tendentious PAC 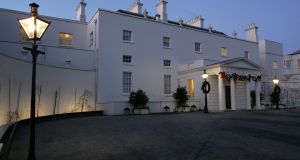 The official cost of the President’s office in 2016 was €3.6m, of which €1.15m was accounted for by the bonus paid to citizens who have reached 100 years of age. Photograph: Frank Miller

The disclosure at the Public Accounts Committee (PAC) that the President has an annual unaudited allowance of €317,000, on top of his regular expenses and salary, will add to the pressure for greater transparency about the cost of running Áras an Uachtaráin.

Comptroller and Auditor General Seamus McCarthy revealed that the unaudited allowance has been paid to presidents from funds controlled by the Department of Finance and has been at its current level since 1998. The allowance is paid under the President Establishment Act 1938 and there is no direction about how it is spent.

The official cost of the President’s office in 2016 was €3.6 million of which €1.15 million was accounted for by the bonus paid to citizens who have reached 100 years of age. However, the overall cost of the office, when expenditure incurred by the Department of Foreign Affairs, which handles travel by the President, and the costs incurred by An Garda Síochána as well as the maintenance of the Áras are included, brings the total to €8.2 million.

It is unfortunate that the issue has arisen on the eve of the presidential election as there is no suggestion that expenditure of the current incumbent is out of line with that of previous occupants of the office. In fact President Michael D Higgins set a good example by continuing the voluntary pay cut of 25 per cent adopted by his predecessor.

The President has been put in an embarrassing position by the way the secretary general of the Taoiseach’s department, Martin Fraser, sought to limit the nature of the inquiries being made by the PAC. The independence of the President’s office is indeed something that should be protected but that does not mean there should be a lack of transparency about its activities and its spending.

The behaviour of the PAC in recent years and in particular its partisan examination of high profile witnesses, was probably one of the reasons the Taoiseach’s department was apprehensive about the committee’s decision to look into the issue. The intervention by one of the PAC members, Marc MacSharry, who at Tuesday’s meeting described the unaudited allowance as a “slush fund”, was in line with the tendentious behaviour that is too often a feature of PAC hearings.

Nonetheless, the core of the issue is that the spending of public money should be accounted for in an open and transparent fashion. The revelation that an internal audit committee established in 2014 to monitor spending at the Áras did not meet until this year indicates that the issue was not taken nearly seriously enough.

Labour Party leader Brendan Howlin suggested recently that Higgins would have no difficulty in publishing the expenses and costs associated with running Áras an Uachtaráin. Such an initiative by the President would be a helpful way to deal with the matter.

1 Mike Murphy: ‘I won’t do another over-70s lockdown’
2 Prof Sam McConkey: This is the beginning of the second Covid-19 wave in Ireland
3 Coronavirus: Public health experts considered moving Dublin to Level 4
4 The far right rises: Its growth as a political force in Ireland
5 Fintan O’Toole: It is June 24th, 2025 – and Brexit has worked
Real news has value SUBSCRIBE