The unions’ main concern is that the agreement involves the loss of 20,000 public sector jobs 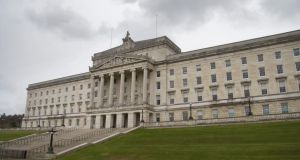 ‘This is the first time trades unions have opposed a Stormont deal. On every previous occasion, the ICTU and individual unions have hailed the outcome as a welcome contribution to the consolidation of peace’. Photograph: Getty Images

One of the factors behind Sinn Féin’s decision on Monday to pull out of the Stormont House Agreement was a series of trade union demonstrations tomorrow calling for rejection of the agreement.

All major public sector unions in the North will be on strike. Most schools and, it is expected, all social security, Housing Executive and civil service offices will be closed. No buses or trains will run. Marches and rallies opposing the economic components of the agreement will be held in Belfast, Derry, Strabane, Enniskillen, Omagh, Magherafelt, Cookstown, Dungannon and Craigavon. (Interest declared: I represent the NUJ on Derry Trades Union Council.)

Over the past month, more than 100 meetings have been held in union offices, community centres and rooms above pubs urging attendance at the protests. Some have been small, others have drawn reasonable audiences of 50-100. This has been the most extensive union operation in the North in living memory.

The demonstrations may not be as big as union optimists expect. The success of appeals to the wider community is far from guaranteed. Enthusiasm sits alongside a degree of cynicism. References to the Grand Old Duke of York have regularly been heard.

The prospect of being at loggerheads with the unions has dismayed many in Sinn Féin. The party’s ardfheis in Derry last weekend heard an address by Ictu president Jack Douglas, extolling its adherence to the union cause. To the delight of the party, Siptu general secretary Jack O’Connor chose the occasion of the Labour Party conference in Tralee a fortnight ago to hail Sinn Féin as a potential friend of Labour in government.

The party will be acutely aware that many of those who march tomorrow are likely to have voted Sinn Féin in the past.

The vehemence of the unions’ denunciation of the agreement has taken many aback. Leaflets and advertisements have been headed “No Deal! . . . No one voted for our elected politicians to do a deal like this. It is bad for workers, for all communities, for society and for equality.”

This is the first time trade unions have opposed a Stormont deal. On every previous occasion, they have hailed the outcome as a welcome contribution to the consolidation of peace.

Sinn Féin will also have been aware that, despite chaotic disagreement between the two main parties as to what was actually agreed, some past statements on the Assembly record are damning. Responding to claims that the party only discovered last weekend that its Executive partner was interpreting the agreement to mean that “top-up” payments would not apply automatically to all present and future recipients of disability living allowance, the DUP has repeatedly quoted its Social Development Minister Mervyn Storey in the Assembly on February 14th:

“The disability protection scheme . . . involves making a financial payment to those DLA claimants who are unsuccessful in their claim for personal independence payment and who subsequently appeal the disallowance decision . . . A financial payment should be made to those claimants and continue until the appeals service has made a decision on the claimant’s appeal.

Green Party leader Steven Agnew MLA, whose attempts to amend the Welfare Bill were systematically voted down by both main parties, described as “irresponsible” Sinn Féin’s claim that no claimant would lose out under the agreement it had put its name to.

The fact that Sinn Féin is now opposing at least some of the cuts which most observers see in the agreement has been welcomed by claimants’ organisations and community and union groups. But the fact that the party has taken such a long and winding road to reach this point has not encouraged confidence that the way ahead will be straightforward.

The numbers mobilised by the unions tomorrow may tell a tale of more relevance to the chances of the agreement surviving than many of the matters widely canvassed since the start of the week.