Donald Trump underestimated the power of a team

US president Donald Trump says NFL owners "should do something" about the players who are taking a knee during the national anthem before games, saying "it's very disrepectful to our country." Video: NFL/Reuters 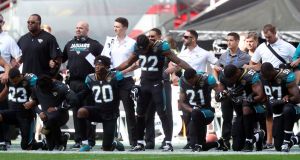 Last week US president Donald Trump told an audience in Alabama that those athletes of the NFL who disrespected the pre-match playing of the national anthem should be sacked. He said team owners should “get that son-of-a-bitch off the field right now”.

The protest whereby a growing number of athletes across different US sports refused to stand for the anthem began with San Francisco 49ers player Colin Kaepernick in August 2016. Kaepernick’s justification was simple: “I am not going to stand up to show pride in a flag for a country that oppresses black people and people of colour”.

1 What did it mean to be an Irish teenage girl in the early 1990s?
2 Gerry Thornley: Wild reactions to this Ireland team as fickle as the wind
3 Eason acquires rival Dubray Books for undisclosed sum
4 Coronavirus: Tenerife hotel in quarantine after tourist tests positive
5 Fintan O’Toole: If murderous dissidents are wrong, so was Provisional IRA
6 Woman in her 30s arrested after man fatally stabbed in Co Dublin
7 Solar panels: Are they worth the investment?
8 Irish health officials to ramp up precautions against coronavirus
9 Graduates 'not well-equipped' for future workplace
10 Bank leaked my loan request to family who tried to rip me off
11 Perfect pancake recipe: How to make a better batter
12 My days of eating meat at every meal are over
13 EU-UK deal depends on enforcing Irish Sea border, Simon Coveney says
14 It may be too late to stop Bernie Sanders winning democratic nomination
15 Coronavirus: ‘I’ve planned a holiday to northern Italy. Should I cancel?’
16 A cardiac problem that could strike at any time
17 Why Sinn Féin will not call the State by its name
18 England and Eddie Jones at the vanguard of rugby’s hybrid era
19 McDonald says SF meetings not ‘an affront to democracy’
20 Fuel company loses €1.3m challenge over tax bill
21 Caelan Doris and Ronan Kelleher make strong case to start against Italy
22 Nationwide snow and ice warning comes into force
23 Investigation into Dublin housing charity launched
24 Conor Pope: At 19km/h, I have never felt less like an athlete
25 Floodwaters close part of Limerick and Galway train line
26 Coronavirus: Irish citizens advised not to travel to Italy’s affected areas
27 First Irish rubella case for over a decade confirmed in Cork
28 Seven killed, 150 injured in riots in Indian capital Delhi
29 When the Chemistry no longer works – the closing of a leading Irish ad agency
30 ‘It affects your nervous system, your brain, your thought process’
31 Spread of coronavirus triggers European travel curbs
32 Coronavirus: Questions over Ireland’s readiness for what might come
33 Costa living: ‘Move home to Ireland? I’d hate it’
34 Trinity College plans wildflower meadow on College Green
35 Garda warning after €500,000 of ‘movie money’ found in circulation
36 Harvey Weinstein accusers hail rape conviction in watershed trial
37 A bit of heresy now and then does the Catholic Church no harm
38 An Irishwoman in Milan: ‘Everything that usually seems important suddenly isn’t’
39 ‘He was angry and punched it about nine times’: Should you recline your airplane seat?
40 Eastern Europe faces a demographic crisis of its own making
Real news has value SUBSCRIBE