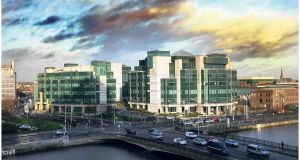 International Financial Services Centre: Team Ireland has constantly dismissed the description of Ireland as a tax haven, even when the extent of that haven is patently obvious. Photograph: Bryan O’Brien

If the Department of Finance is to be believed, there must be an awful lot of eejits slaving away on academic research projects about tax.

Economists at Berkeley and Copenhagen have concluded that Ireland is the biggest “tax haven” in the world used by multinationals to “shelter” profits. Foreign multinationals shifted $106 billion (€91 billion) of corporate profits to Ireland in 2015, according to these academics. This was the same year the former minister for finance Michael Noonan announced the phased closure of the “Double Irish”, which allowed companies to move profits to tax havens, with a transition period for existing companies until 2020. The department dismissed the findings in the recent report relating to Ireland as “overly simplistic . . . Ireland is not a tax haven and does not meet any of the international standards for being considered such”.

7 Kia’s spacious Sorento is like a sittingroom on wheels

9 Wolfwalkers: Cartoon Saloon has made its best film yet

13 Marion Davies was as big as Valentino. Then she had a scandalous affair

17 ‘I’m going to quarantine for two weeks, in the spare room, away from my family’

23 Michael McDowell: Time to wake up and smell the coffee over Sinn Féin

27 After the vaccine, will your company want you back in the office?

31 Mercedes faces stiff competition from itself with the GLA

32 Fintan O’Toole: How does defence of trans rights become search for women to blame?

34 A rare brain condition: ‘I thought I was losing my mind’

35 Distribution of Covid-19 vaccine could start in January

37 Taoiseach tells EU to ‘hold the nerve’ in Brexit negotiation

39 Lab-grown meat is approved for sale in world first

40 Apple’s cash mountain, how it avoids tax, and the Irish link