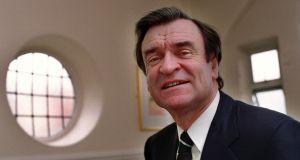 The late Anthony Clare: his last book, “On Men: Masculinity in Crisis”, was published in 2000: he seems to have been remarkably premature in some of his pronouncements as well as being too reductive. Photograph Brenda Fitzsimons

Frequently described as “the leading psychiatrist of his generation”, Dubliner Anthony Clare died suddenly 10 years ago. The publication of his book Psychiatry in Dissent in 1976 launched his very public career and he became a mainstay in British and Irish media as well as holding senior academic posts in London and Dublin. The BBC Radio 4 programme he presented, In the Psychiatrist’s Chair, ran from 1982 to 2001 and made him famous while also ensuring he was credited with almost single-handedly demystifying psychiatry.

Clare was profoundly humane and talented and did lot of good for many of his patients but was controversial and regarded by some his peers as a “pop psychiatrist”. He also had his own crises, including his late-middle age one which resulted in the publication of his last book, On Men: Masculinity in Crisis (2000), centred on the idea that men were suffering from a crisis of identity due to the challenges to patriarchy and were being pathologised in a manner similar to how women had been negatively stereotyped for so long. The traits that make “us the men we think we are and would like to be – logical, disciplined, controlled, rational, aggressive – are now seen as the stigmata of deviance. The very traits which once marked out women as weak and inferior – emotional, spontaneous, intuitive, expressive, compassionate, empathic – are increasingly being seen as the markers of maturity and health.”

1 Inside Meghan and Harry’s new $14.7m nine-bed, 16-bath California home
2 Nine tenants evicted from north Dublin property by men in masks and dark clothing
3 Aaron Brady, the man who said with pride he was a cop killer
4 ‘A smoking gun’: Infectious coronavirus retrieved from hospital air
5 Relieved mother of rescued women says paddleboards will never ‘darken doors’ again
6 Britain fails yet again to take Ireland into account
7 Mixed fortunes of gang linked to Det Garda Donohoe killing
8 Housing activists assist tenants to re-enter property following eviction
9 Rob Delaney: Could I feel what they were doing when I had my vasectomy? Yes
10 Covid-19: Ireland cannot keep relying on volunteers for contact tracing
11 Covid-19: Plumbers, carpenters among self-employed to get new €1,000 grant
12 Garda killer Aaron Brady will be almost 60 by time he leaves prison
13 Taoiseach warns against ‘second systemic shock’ of no-deal Brexit
14 Taxi driving: ‘Now I’m deciding where I’m going to park’
15 Ban on beer kiosks draws ire as Berlin dances on edge of volcano
16 Emollient Micheál Martin hears baby talk from Boris Johnson
17 Moving in and out of lockdown is a recipe for economic disaster
18 GAA in Ballymun: The whole team were called ‘scumbags’ by grown adults
19 Bundini Brown: The man who invented ‘float like a butterfly, sting like a bee’
20 Investigation launched into racist abuse of Irish woman in Galway
21 Guiding young Irish women, who lack representation in Stem fields, all the way to world finals
22 Worst sporting moment: White knuckle ride on a hate-filled night at Windsor
23 92 new cases of Covid-19 confirmed with no new deaths
24 Conor Pope’s staycation diary: ‘It’s like I’m staring at a Polaroid of my childhood holidays’
25 Coronavirus: New Zealand PM says outbreak will ‘get worse’
26 Steve Martin at 75: ‘The name Dr Michael Hfuhruhurr still makes me laugh’
27 Brown Thomas and Arnotts to cut 15% of jobs due to coronavirus crisis
28 Diarmaid Ferriter: Island mentality and threat of infection
29 Israel to ‘suspend’ annexations after UAE peace deal
30 Keanu Reeves: ‘Grief and loss are things that don’t ever go away’
31 Arrivals into North from France and Netherlands must quarantine from Saturday
32 Planning a move to New Zealand? Here’s everything you need to know
33 Eir customers lose sports content over contractual row with Virgin Media
34 Nick Cave criticises cancel culture as ‘bad religion run amuck’
35 Project Power: Netflix nails the action movie
36 Anne Harris: Meghan Markle’s exile stands as permanent rebuke to royal family
37 He Knows No Fear lands 300-1 shock at Leopardstown
38 Overseas meat plant workers ‘cheated out of social security rights’
39 Irish in Australia: ‘We are in for a few hard years’
40 Without visitors, my home became an empty doll’s house
Real news has value SUBSCRIBE