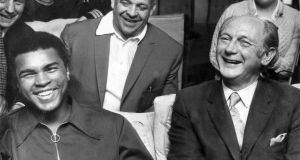 Taoiseach Jack Lynch had been more than happy to host Ali in his office at Leinster House; indeed, judging by contemporary reports, the atmosphere was positively giddy. Photograph: Kevin McMahon

Following the death of Muhammad Ali there was no shortage of lists of memorable quotes from him and about him.

There was one quote that did not make the cut, however. Hidden in the National Archives until its release in 2003, it was authored in Irish by an officious civil servant in president Éamon de Valera’s office at Áras an Uachtaráin in July 1972 when Ali visited Ireland to fight Al Lewis in Croke Park. Fianna Fáil TD for Kerry South Tim O’Connor had relayed the message to the president’s personal secretary that the promoters of the fight “wished that Muhammad Ali would have the opportunity to visit the president”.

A few days later, a Fine Gael Dublin TD, Mark Clinton, called with the same request, but was told “that an tUachtarán would be unable to receive Mr Ali within the dates on which the latter would be in Ireland”.

He also added, “go háirithe tar éis a ndúirt sé faoina chuairt, agus go háirithe a chuairt ar an taoiseach” (“especially following what he said about his visit and his visit to the taoiseach in particular”).

Taoiseach Jack Lynch had been more than happy to host Ali in his office at Leinster House; indeed, judging by contemporary reports, the atmosphere was positively giddy as the two men verbally sparred with each other in the company of ministers, TDs, civil servants “and anybody else who could squeeze into Mr Lynch’s office”. Comparisons were made with the enthusiasm with which President John F Kennedy had been greeted in 1963.

What would have raised the antennae of the staff in the president’s office, however, given the need for the president to steer clear of controversy, was Ali’s keenness to publicly compliment the Irish people on “their proud history of struggle” and his assertion that “my people, too, have been underdogs for a long time”.

So there was to be no Ali vs de Valera, who was then near the end of his second term as president, and aged 90. But that did not mean that the political fun was over. Members of Dáil Éireann still had to see out the rest of the political term before the long summer recess, and the day after he visited Lynch’s office, Ali was to the fore of some minds, especially that of Joseph Lenehan, Fianna Fáil TD for Mayo West.

While the taoiseach and Liam Cosgrave, the leader of the opposition, debated weighty matters such as the Troubles in Northern Ireland, the national wage agreement, inflation and EEC membership, Lenehan recalled the previous, glorious day in the company of The Greatest: “When Cassius Clay or Muhammad Ali – he actually gave me a pen as a souvenir – was here last night he said we were very decent people. I would hold that view.

“We can agree with any type of religious people from anywhere . . . religion makes no difference to me – I suppose because I have so little of it myself. It is absolutely ludicrous that Hindus or people of any other religion can come into the North but Catholics get into trouble. It makes no sense.

“But it would be unfair not to paint the other side of the picture. One of the reasons given why we cannot have complete independence is the Constitution. I do not know how many deputies ever saw or read the Constitution. It always reminds me of a whole dose of bits and pieces out of the Bible or the Koran. Politically, it makes very little sense. If a Muslim or a Hindu comes here, we do not obstruct his activities. An Egyptian can come here with six wives. It is unfair to us that we are tied to one.

Following this knockout performance by Lenehan, it was probably just as well that the following day, July 14th, the Dáil rose until October 25th.