Diarmaid Ferriter: Ireland faces a day of reckoning on abortion

The State is finally confronting the consequences of the 1983 referendum 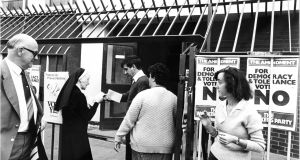 A nun hands out Yes leaflets at Basin Lane polling station in Dublin on the day of the abortion referendum in 1983. Photograph: Pat Langan

The atmosphere during the 1983 abortion referendum campaign was toxic. So much so that Thomas Hesketh’s 1990 book about the referendum was titled The Second Partitioning of Ireland? Journalist Gene Kerrigan, who described the referendum as “the Moral Civil War”, wrote about the campaign for Magill magazine and referred to “the rabid accusations, the political speeches from the pulpit, the poison pen letters, the threatening phone calls, the attacks on the media”.

The polarisation facilitated the reduction of a complex issue to a supposedly “pro” versus “anti” life stance. There was much denial too. Despite talk of Ireland as the last bastion of Christianity – gynaecologist John Bonnar insisted “Ireland stands alone in her fight to defend the Judeo-Christian moral code of sexual behaviour and the sanctity of life” – Eamonn McCann pointed out that “abortion is as Irish as the little green shamrock”.

11 New to the Parish: Abdullah Afghan and Fatima Abdullah arrived from Afghanistan via Pakistan

15 Will the new first-time buyer plan push up house prices?

37 I, Tonya reveals a deeper truth than Harding’s level of guilt

39 Long Covid in children: New data is cause for concern, scientists say

40 Finn McRedmond: Wokeness is dying, another victim of the pandemic