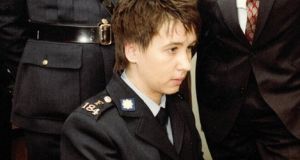 Garda Majella Moynihan in 1998: As senior gardaí interrogated her, she was subjected to a lay version of a Catholic marriage tribunal. Photograph: RTÉ

In September 1922, in the midst of the Civil War, Eoin O’Duffy was appointed commissioner of the new Civic Guard, shortly to be renamed An Garda Síochána. At a time of strife and upheaval, O’Duffy had his answers to the questions of what would make a disciplined force and they revolved around religion and discipline. He placed great emphasis on clean-living, preached what his biographer Fearghal McGarry characterised as “the gospel of national virility”, and indulged his obsession with “manliness”.

O’Duffy presided over what was considered a Catholic police force for a Catholic state and 98.7 per cent of those who had joined the force by 1932 were Catholic. In April 1923, 1,500 gardaí paraded outside the Garda depot in the Phoenix Park for a religious ceremony in front of a large banner of the Sacred Heart and dedicated their work to the service of God. Annual religious retreats and missions in the depot were also instituted and, in 1928, O’Duffy led a pilgrimage of 250 gardaí to Rome where they were granted a special audience with Pope Pius XI.

1 Cardiologist saved by paramedics after heart attack at Dublin Airport
2 Love Island tribute to Caroline Flack hides the truth
3 David Baddiel comes to Ennis to meet a Holocaust denier
4 Two Irish passengers test positive for coronavirus
5 First Look: New wine bar opens alongside Dublin car park
6 Body part found on Donegal beach by person out walking
7 €35,000 a bottle: most expensive Irish whiskey goes on sale today
8 Paraic O’Donnell: MS is meticulously destroying me. I am being unmade
9 Ireland to stick with winning formula against England
10 Mediterranean diet fuels bacteria that may reduce old-age frailty
11 Q&A: How long could it take to form a new government after Election 2020? Could things get messy?
12 I’m happy I went vegetarian. I have no desire to eat meat again
13 Aodhán Ó Ríordáin running to become Labour Party leader
14 Fintan O’Toole: Post-election urgency needed as voters run out of patience
15 Cummings responds to critics over adviser’s race remarks
16 Wales cry foul over Furlong’s scrum technique
17 Green leader says left-leaning coalition would be unlikely to last
18 Galway’s traffic is ‘crippling and stifling city living’
19 How can I view my dead brother’s will if I’m not the executor?
20 Woman who says she was trafficked from Nigeria wins court challenge
21 ‘Exposure doesn’t pay bills’: What artists say about freebie culture
22 Brian O’Driscoll accuses England boss Eddie Jones of ‘scaremongering’
23 Approval granted for more than 650 apartments beside St Anne’s Park, Dublin
24 Revealed: Where to find Ireland’s best breakfasts and brunches
25 Woman waited for mother, aunt to die before reporting sex abuse by cousin
26 What you need to know about pensions
27 Garda pleads guilty to causing fatal crash on M4 motorway
28 Investors pile into property as turnover in build-to-rent sector reaches €2.54bn
29 Dancing with the Stars has hit Father Ted levels of farce
30 Dublin council official calls for ban on parents driving children to school
31 Provisional liquidator appointed to Dublin engineering firm
32 Varadkar says Sinn Féin and Fianna Fáil should form coalition
33 Woman sues over alleged failure of Breastcheck clinic to diagnose cancer
34 People over 50 led vote for change, say political parties
35 Getting closer to the whole truth of the Troubles
36 Fine Gael’s plan for opposition a sign of ‘humility’, says Coveney
37 Should fans be allowed drink in the stand at sporting events?
38 Gerry Thornley: England primed to show their best against Ireland
39 Over-reliance on inhalers putting asthma sufferers at risk
40 Bombed as they flee: A million Syrians try to escape Assad’s onslaught
Real news has value SUBSCRIBE