Harbour will be marine version of defunct Main Street 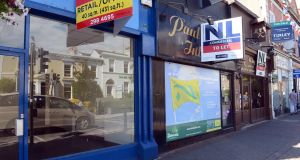 There can be no doubt that the town of Dún Laoghaire and its beautiful harbour are inextricably linked.

It is nearly 40 years since Dunnes began buying up a tranche of the Main Street to build a supermarket. A few years later, property investment group MEPC bought out another large chunk of the town centre to build that modern carbuncle, or paean to failure, the Dún Laoghaire Shopping Centre. Twenty years later came the Bloomfields Shopping Centre. Dereliction jousted with retail overexpansion and the town was effectively dead.

Something similar is about to happen to the harbour with the proposal to build a pier for cruise ships. In case you are in any doubt, here is a quote from the Dún Laoghaire Harbour Company’s proposal:

“In order to realise the proposals of the masterplan, it will be necessary to make physical interventions in the fabric of the harbour. This could range from the construction of a new breakwater to making breaches in the pier walls.”

Cities of the Seas

These behemoths will disgorge their human cargo of 6,000 or so onto the pier where buses will take them to enjoy the Guinness Storehouse or visit Glendalough. These tourists won’t spend money in the town, according to research by the Ratepayers Association. They get on buses at their arrival points and travel on an all-inclusive basis while on their cruise.

The economics of the cruise pier don’t stack up. Harbour Company estimates put the overall cost at about €20 million, but the HSS fast-ferry in the harbour berth cost something close to that in 1996. Similar facilities around the world cost in the region of €40 million plus. Dredging is to take two to three months and involve removing enough material to fill Croke Park 17 time over.

What’s more, Dublin Port Company can already accommodate all projected cruise capacity requirements up to 2020 – and it is expanding.

This white elephant, if built, will fall on the property tax payers of Dún Laoghaire- Rathdown County Council. If it even gets planning permission, the harbour will be a dead-duck for the eight-year duration of the permission, whatever the construction period turns out to be.

It will be still another manifestation of Dún Laoghaire’s dying Main Street.

A cruise in the park

Do the users of Phoenix Park and Marley Park, principally the GAA clubs, pay for their total upkeep? No: it is a resource in which the incumbent users, mainly not-for-profit sports clubs, contribute to the upkeep, in addition to maintaining their own premises.

Do the users of these parks additionally pay for a separate State company and a board of director’s to run them? No, they do not, and neither should visitors to Dún Laoghaire harbour. Times have changed, and we should recognise that fact and reorganise the management of the harbour into the existing structures that are available and willing to run them: the people via their elected councillors.

We on the committee have consistently suggested a sustainable development idea for the harbour: a water-sports academy, not unlike that at Pwllheli in Wales, in Weymouth in England or Medemblik in the Netherlands.

This would be a place where our Olympians can train and where Dún Laoghaire can develop on our undoubted reputation for the organisation of major international events that bring proven economic benefits to the town.

Dermot Reidy is a club nominee to the Dún Laoghaire joint clubs committee, which opposes the cruise berth planning application