David Trimble: Tear up the Northern Ireland protocol to save the Belfast Agreement

The withdrawal agreement protocol ignores the fundamental principle of consent 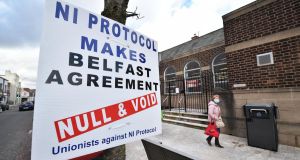 The Northern Ireland protocol agreed by UK prime minister Boris Johnson as he struggled to get a Brexit deal in time for the 2019 general election is already leading to problems. Not only does it shatter Northern Ireland’s constitutional relationship with the UK, but it also is damaging our fragile economy.

The disruption to trade has been well documented. Empty supermarket shelves are evident as some food imports are prevented from entering Northern Ireland from Britain. Customs declarations are required for personal online purchases from Britain for everything from clothes to ink cartridges. Horticultural trade by retailers and personal orders worth hundreds of millions of pounds every year have virtually stopped. Petty rules have been enforced by European Union inspectors who oversee the work of UK officials at Northern Ireland ports – to the extent that used machinery has been turned away if there is soil in the treads of the tyres. Some businesses have been waiting weeks for supplies of parts.

7 The future of Covid-19 in Ireland: Best-case, worst-case and even-worse-case scenarios

10 Mothers going it alone: ‘A house filled with love’

11 When a ‘good father’ decides to kill his whole family

14 Gardaí contacted one of brothers before Cork murder-suicide

16 Dylan Moran: ‘Smoking or breathing, one of them had to go’

17 Maureen Dowd: Many on the left don’t understand what a reporter is

21 Will daughter get CGT exemption for renting home in 2014?

30 Divers steal beer being aged by sunken ship off Argentina

31 How to get your children to sleep: Six steps to bedtime best practice

34 Covid-19: Six more deaths and another 612 cases confirmed in the State

35 TV View: No need to feel sorry for England, but if it was any other team

37 Vaccinated in London: I feel guilty that people I love in Ireland haven’t been inoculated

38 The chickpea stew that broke the internet in the US is here. Give it a go

39 Chris Johns: Era of free money could be coming to an end

40 Barry Gibb: ‘My brothers had to deal with their demons, but my wife wasn’t going to have it’