David McWilliams: There is a vaccine to immunise the economy. It’s the bond market

Medically, Ireland is to continue with the lockdown strategy, so what is our economic plan? 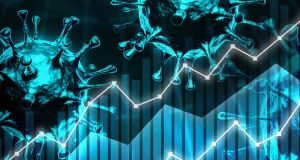 The rate of interest, which is the price of money in the future, is officially zero. What this means is there is no cost to dipping into the future to bailout the present. Image: istock

During the first great agricultural revolution (10,000 BC to 5,000 BC), when humans moved from being hunter-gatherers to farmers, settling in small villages and ultimately towns, the world human population is estimated to have increased from four million to five million.

In the next 5,000 years, from 5,000 BC to the birth of Christ, the human population is thought to have increased from five million to 100 million. In this second 5,000-year period, the human population increased approximately 25 times whereas in the first 5,000-year period, the increase was marginal. The reason for this disparity is that the earlier five millennia of domestication were the most lethal years in human history.

12 Róisín Ingle: ‘Simon Harris is going live,’ my phone says, and I can’t stop myself

13 Has Dublin built too many luxury apartments?

14 How vaccine laggard CureVac hopes to come out on top

17 ‘The type of pornography that my partner watches upsets me’

19 Gordon D’Arcy: No Irish player has inspired in the Six Nations like Seán O’Brien used to

26 Northern Ireland protocol: Unionism shoots itself in the foot

33 Clonfin ambush can teach us about ethical remembering

34 Household visits and playdates ‘still out’ despite return to schools

35 When exactly will my children go back to school?

37 Sam Bennett: ‘Cycling is who I am. It got me out of my bedroom, out to meet great people’

38 Michael Harding: I wear a tie to Zoom meetings. It helps me play a role – myself

40 Driving licence expiry dates to be extended for second time