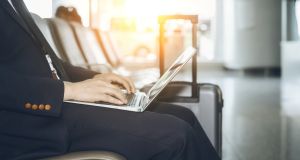 Right now business travel is down 96 per cent since the start of 2020. Photograph: iStock

Now that we are looking at the beginning of the end of the pandemic, it is time to assess the likely long-term impact of this experience on the economy. Calling the end of a pandemic is obviously fraught with danger, but at some stage we have to believe in science.

The various successful vaccines that have recently been announced will allow us to re-enter the 21st century in terms of the tools we deploy to fight this disease. For nearly a year, we’ve been using medieval technology; the quarantine has its origins in the 6th century when the emperor Justinian sought to stop a plague by isolating certain groups arriving in Constantinople.

6 Fairytale castle in Kerry sold for €4.5m after 13 years on market

8 Gordon D’Arcy: David Nucifora does not believe he is accountable to the Irish public

12 Michael McDowell: Time to wake up and smell the coffee over Sinn Féin

15 Kathy Sheridan: What was the purpose of Brian Stanley’s tweet glorifying mass killings?

19 ‘It has to stop’: Republican Georgia election official lashes out at Trump

23 Kia’s spacious Sorento is like a sittingroom on wheels

31 Michael Harding: I got up close with a badger one night. I know he’s still out there

32 Pfizer/BioNTech vaccine: what you need to know about UK approval

40 Fintan O’Toole: How does defence of trans rights become search for women to blame?