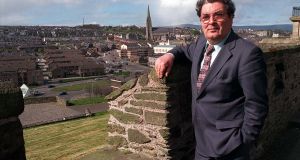 John Hume on the Walls of Derry, spring 1998. Photograph: Pacemaker

In Mickey Bradley’s book Teenage Kicks: My Life as an Undertone, the bass player reveals that without Derry Credit Union, set up by John Hume in 1960, The Undertones might not have happened.

On June 15th, 1978, The Undertones had blagged their way on to the bill of a battle of the bands in Belfast, hosted by the legendary Terri Hooley of Good Vibrations record shop. Belfast was home to Stiff Little Fingers, whom The Undertones had just seen play in Kelly’s of Portrush. SLF had released the highly charged political single Suspect Device under their own record label and had just signed a new deal with the most happening independent label, Rough Trade. For the Derry boys, Belfast was big time.

1 ‘Insane’ gathering of hundreds of students in Galway condemned
2 Prepare for six to nine months of Covid-19 restraints, warn health officials
3 Speed and distance of Covid-19 droplets tracked by Mater researchers
4 Do headstands, clear out a junk drawer, have sex: 15 ways to re-energise your day
5 Sean Quinn stunned at rebranding of Quinn Industrial Holdings
6 Probate is changing: What does that mean for you?
7 Róisín Ingle: How to eat out in a pandemic. Don’t do what I did
8 Covid-19: Seventy cases in Cork traced to local pubs and restaurants in recent weeks
9 Graham Norton: ‘I wanted out, out, out of Ireland’
10 Fintan O’Toole: My father wanted to die and I promised to help him
11 Liverpool crank up familiar brand of strangulation football
12 ‘Therapy completely changed my life, once I gave it my all’
13 Gerry Thornley: South African sides would be a welcome addition to Pro14
14 Dublin Aerospace takes over Flybe’s aircraft servicing base at Exeter Airport
15 North’s PPS upholds decision not to prosecute 15 British soldiers over Bloody Sunday
16 H is for hero: the origin story of Jack Reacher, a billion-dollar brand
17 No joy for consumer with a faulty Husqvana chainsaw
18 The Shipman Files: ‘You mean Dr Death, dear’
19 Paul Krugman: Trump’s Debt, His Future and Ours
20 Ireland’s travel green list reduces to four countries
21 Will tracker mortgage be at risk if Ulster Bank closes?
22 Susie Dent: ‘Jimmy Carr is incredibly rude to me. I took it as a compliment’
23 Olivia O’Leary: If you move to Carlow, there are things you’ll have to get used to
24 Great outdoors: Meet the teachers taking lessons beyond the classroom
25 Rob Kearney signs one year deal with Australian club Western Force
26 Coronavirus: Test-and-trace system could cost €700 million, says HSE chief
27 Meet ‘friluftsliv’ – the new hygge for living outdoors
28 Amnesty suspends India operations after accounts are frozen
29 Rolls Royce Ghost: More than just a plaything for the rich and shameless
30 Irish golf tourism faces ‘wipeout’ unless Covid travel restrictions eased
31 Irishwoman Adrienne Gormley joins N26 as chief operating officer
32 Schools fear losing teachers due to Covid-linked pupil absences
33 Ryan believes Coalition partners share his concerns over D’Arcy appointment
34 Makhlouf secures UK pension on top of €286,800 Central Bank role
35 Jürgen Klopp and Roy Keane clash over ‘sloppy’ comment
36 Three Ireland switches on 5G network around the country
37 Almost a third of Garda firearm discharges found to be accidental
38 Life in Level 3: What is happening under the new restrictions in Dublin?
39 Covid-19 upheaval points way to solving persistent inequality
40 ‘I never suspected that, aged 29, I’d be lost’
Real news has value SUBSCRIBE