David McWilliams: Dublin Port is a waste of space. Move it

One solution to the housing crisis? Move the port and build a new kind of capital city 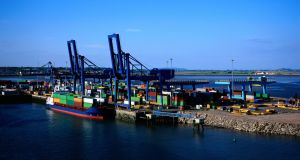 Dublin Port: imagine a shiny new city facing out to the sea instead of a few oildrums and containers. Photograph: David Toase/Getty Images

There is an obvious solution to Dublin’s crippling capacity problem: move our Port and develop one of Dublin’s greatest natural assets into a new, gleaming city. Dublin is one of the last major cities that continues to have a port on its most valuable prime land. Cork is moving its port, and if it’s good enough for Cork, it’s good enough for Dublin.

In the past two decades Barcelona, Bremen, Copenhagen, Amsterdam, Oslo, Bilbao, Buenos Aires, Genoa, London and Cape Town have all moved their ports and liberated the land to create beautiful new cities in which people can work, live and play. Auckland is doing the same. Old port cities realise that they no longer need ports to be at the mouth of rivers, as rivers are no longer used for transport.

1 We need to pay very close attention to what is happening in Britain now
2 Irish tourists excluded from visiting Greece as country begins its tourism season
3 Remaking Ireland: Five positives from the pandemic
4 Connell losing touch with the club championship is the real tragedy of Normal People
5 50 things to do in Ireland this summer
6 David McWilliams: Ignore the austerity ‘jihadis’. Here’s an alternative economic strategy
7 Quarantine will cease within fortnight, Ryanair CEO claims
8 Nineteen-year-old killed as protests flare up after death of George Floyd
9 Making sense of conflicting data around Covid-19 deaths
10 Great reads: 20 books to unwind with this summer
11 Microsoft sacks journalists to replace them with robots
12 The Late Late Show rediscovers its original purpose
13 Patience wearing thin as three parties crawl towards a government
14 Fintan O’Toole: It is time for an Irish National Health Service
15 ‘Gross incompetence’: Ex-Obama adviser blasts Trump’s Covid-19 response
16 Testing of Covid-19 tracing app to begin but no date for launch
17 Dating Amber: A story about two gay teenagers, being each other's beards
18 ‘Adultery is like getting a dent in a new cor. Once you’ve done it the first time, it becomes easier’
19 Ghosts and goalposts: The soul of street football in Dublin’s Gloucester Diamond
20 ‘The recovery needs to be a full-scale economic renewal’
21 Almost 1,000 students fail to register before calculated grades deadline
22 Taoiseach has confirmed schools will reopen at the end of August
23 Phil Hogan ‘exploring idea’ of WTO director general role
24 Pat Leahy: Whatever happens, this recession will change Irish politics
25 Garda to scale down Covid-19 enforcement for June bank holiday
26 Covid-19: Pupils may be kept apart in groups and pods when schools reopen
27 Luke Kelly sculpture on Sheriff Street vandalised for fifth time
28 Boris Johnson had little choice but to back Dominic Cummings
29 Higgins: ‘This is very, very different to 2008 ... we need radical thinking’
30 Minister calls on EU to act against tobacco firms ‘undermining’ menthol ban in Ireland
31 ‘Dramatic increase’ in littering and dumping in north Dublin
32 An architect’s cottage refurb: ‘It was a beg, borrow and steal project’
33 Michael Smurfit: ‘I asked Trump to invite me to the White House for my 80th birthday’
34 ‘I’m so lucky to be in the Caribbean – a million miles from Derry Girls’
35 Rugby clubs in crisis: ‘I fear a lot of players won’t go back playing at all’
36 The strain is starting to tell on Brendan O’Connor
37 Rise in pension age poses potential problem in coalition talks
38 Small businesses are cannon fodder in zealous anti-virus experiment
39 Trump says, ‘I have the best words.’ Now this comedian’s going viral for lip-syncing them
40 Assessing the Leaving Certificate
Real news has value SUBSCRIBE