David McWilliams: Croatia wins at football, loses in economics – the opposite of Ireland 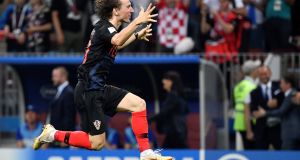 ‘The diminutive Luka Modric from Zadar shows that combination of talent and grit that defines great players.’ Photograph: Alexander Nemenov/AFP.

Let’s just say it was a long night. All around this village, on an Adriatic island where cars were banned many years ago and the locals amble around at a pace that would make Andalusians look like sprinters, flares ignited, strangers hugged wildly and you could hear an entire country roar.

They say voices carry on the sea. Believe me they do. I am in deepest Dalmatia, Croatia’s rugged and beautiful coast. To see our neighbours’ hearts burst open with pride is truly a beautiful thing because Croatia has been through the mill in recent years.

1 Gardaí believe men in Cork murder-suicide chose to let woman survive
2 Jack Nicklaus’ Trump endorsement leads to avalanche of dismay
3 Varadkar rejects allegations he acted unlawfully in sharing draft GP contract
4 Supermarkets compared: How Dunnes, Lidl, Tesco and M&S measure up
5 Cork shootings: Mourners at Mark O’Sullivan’s funeral told of devoted and caring son
6 The Irish living life for less in sunnier climes
7 Explainer: The GP contract talks at the centre of Varadkar controversy
8 Covid-19: Johnson announces second lockdown for England
9 Fintan O’Toole: Defeat for Donald Trump will shape our world
10 The West has failed – US and Europe have made a mess of handling the crisis
11 ‘This could be Belfast in 1968’: How political conflict in the US could descend into violence
12 Covid crisis: 416 new infections bring October total to almost 25,000
13 Sean Connery the man has died. Sean Connery the indestructible legend lives on
14 First full moon on Halloween night since 1974 will be rare ‘blue moon’
15 Even if Biden becomes president, there’s no turning back
16 Jennifer O'Connell: Ireland's pandemic compliance is extraordinary
17 Richard Ford: America could fail. I have never felt this way before
18 Jota forgets penalty miss to steer Liverpool past West Ham
19 Two hundred Irish retailers for all your online Christmas shopping
20 Six Nations - France v Ireland: Kick-off time, TV details, permutations, team news and more
21 Most face masks to protect against coronavirus do not meet standards
22 Psychiatrist in the Chair: Delving into the great mind of Anthony Clare
23 Kite surfer dies after getting into difficulty off north Dublin beach
24 James Bond actor Sean Connery dies aged 90
25 Ireland ‘outperforming almost all European countries in controlling spread of Covid-19’
26 David McWilliams: A plan to put Ireland’s 200,000 vacant buildings to use
27 Revenue publishes list of companies tapping State for wage support
28 Irish surfer Conor Maguire rides ‘Ireland’s biggest wave’
29 Nigella Lawson: ‘I feel insecure if I don’t know what I’m going to eat’
30 Surprised Donegal shopper discovers stowaway tarantula
31 US election: Trump using executive orders to reshape fabric of America
32 England lay down marker for Ireland after bonus point win in Rome
33 World Handicap System: What is it? How does it work? Will my handicap change?
34 Cosy and colourful: this Wicklow cottage is a décor delight
35 Scoring a try by ground at the post is outlawed by World Rugby
36 Coney Barrett unfairly targeted in attacks over childcare
37 Martina Navratilova: ‘If I had Twitter 30 years ago, I would have been raising holy hell’
38 UCD medical students withhold fees in protest at fee increases
39 Six within 60: homes to buy within an hour of the M50
40 Data Commissioner faces large costs bill in ‘most unusual’ Facebook case
Real news has value SUBSCRIBE