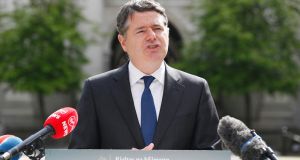 Minister for Finance Paschal Donohoe: assertive macro-economic policy in 2020 is the most responsible thing we can do. Photograph: Leon Farrell/Photocall Ireland

This is not the time for conventional thinking. We are in a pandession. As I wrote recently, a pandession is neither a recession, nor a depression – which are both consequences of economic exuberance. Traditional economic downturns are the wages of inflation.

1 Why you still can’t have a European holiday this summer. Or can you?
2 Former Kilkenny hurler dies after bike struck by tractor
3 Nine more deaths from Covid-19 recorded in Ireland along with 24 new cases
4 America is not broken, it was built this way
5 Irish abroad: Are you worried about when you can visit home again?
6 One of most powerful images of War of Independence
7 Fintan O’Toole: The violence of racism is deeply embedded in American society
8 Green Party’s Catherine Martin confirms she will stand against Eamon Ryan
9 Donald Trump’s political success is based on racism
10 Aer Lingus confirms job cuts due to ‘decimation in demand’
11 Unlocking Ireland: What exactly will happen in reconfigured phase two on Monday?
12 Oliver Callan: ‘I was a perfect candidate for exploitation’
13 Jimmy Gralton, the only Irishman ever deported from Ireland
14 David McWilliams: We won't have another 1980s-style recession
15 Dublin City Council to install temporary public toilet facilities
16 Hundreds protest outside US embassy in Dublin over George Floyd death
17 The sad, secret life of Whitney Houston
18 Paul Flynn: ‘I still have all my old menus. One dish stands out: bang bang chicken’
19 Tianna Bartoletta: ‘After you’ve gotten your medal, you become black in America again’
20 ‘We built a clay oven that cooks a pizza in 60 seconds’
21 Pets are getting confused by the working from home new normal
22 Coronavirus: People to be allowed to travel anywhere in their county from Monday
23 Anti-racism protesters clash with mounted police in London
24 Bookshops and Covid-19: ‘We can’t say to people you can’t look at the books’
25 ‘Get the eff out of this country’: Irish racism, as heard on Liveline
26 NCT and driver theory test centres to reopen from Monday
27 Kenneth Branagh: ‘It’s a challenge, Irishness in cinema’
28 Ross O’Carroll-Kelly: ‘We’re having a fancy dress porty. I’m going as the wife of a philanderer’
29 Theatre-training legend Betty Ann Norton dies in Dublin
30 Why is Germany suddenly embracing its inner Keynesian?
31 Call for the protection of midwifery-led maternity units
32 ‘I saw young girls get kicked, hit, sprayed and dragged off gasping for air’
33 California police fatally shoot 22-year-old man on knees with hands up
34 ‘My girlfriend has put on weight and I’m not attracted to her any more’
35 Over-competition in sport is bad for children’s mental health
36 Green-fingered garden is to dye for
37 Fintan O’Toole: Trial runs for fascism are in full flow
38 Desperation among smiling people in Nepal, says Irish climber
39 Betting shops face uncertain future as they prepare for Monday reopening
40 ‘White Irish people have never had to think about this’
Real news has value SUBSCRIBE