Conor Lenihan: Fianna Fáil will do a deal with Sinn Féin 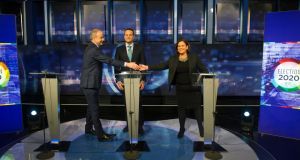 There is now an absolute moral imperative to include Sinn Féin in government. The sheer impact of its electoral success means that leaving it out of government or any attempt to exclude the party would have both a debilitating and a damaging effect on our democracy. This may be an unpalatable message for those from the Fine Gael and Fianna Fáil tradition.

The Sinn Féin surge in election 2020 is as remarkable as it was unexpected. It came as a surprise to the party itself, which under-provided on the candidate side, and was unable to capture the full extent of the surge in seat terms.

1 Coronavirus: HSE braces for possible peak of Covid-19 cases in mid-April
2 Coronavirus: World’s oldest man marks 112th birthday in isolation
3 Coronavirus: 14 more deaths as list of essential workers published by the Government
4 Irish flight bringing PPE from China due in Dublin in afternoon
5 Isolation on the Wild Atlantic Way: ‘I stopped here for the day – and never left’
6 Coronavirus: Government publishes list of essential services
7 Coronavirus: Spain’s death toll rises by record 838 overnight to 6,528
8 Trump abandons quarantine proposal as coronavirus spreads
9 Late Late Show with Miriam O’Callaghan: The most surreal primetime TV I’ve ever watched
10 Gardening for beginners: How to sow and grow for the first time
11 Coronavirus: Ireland suffers highest daily death toll
12 No-stress coffee traybake works every time
13 David McWilliams: We need to totally reimagine economics
14 If you think governments are spending money now, just wait
15 A bean burger from the cans at the back of the press
16 Benign impact of Covid-19 on air quality and carbon emissions
17 Coronavirus: Sweeping powers with fines of up to £5,000 come into force in North
18 Fintan O’Toole: We are learning how much we rely on low-paid workers
19 Is it a good idea to move in with my partner now, or am I mad?
20 Irish writers on Covid-19: ‘We’re all having a shockin’ dose of the wombles’
21 Father of three deceased children appeals for letters during isolation
22 Man who allegedly spat at garda and said he had coronavirus due in Cork court
23 Leading Northern Ireland lawyer in critical condition because of coronavirus
24 Remote working doesn’t suit everyone, and it exposes woolly leadership
25 Coronavirus: The list of businesses allowed to stay open under new measures
26 Coronavirus: 16 tips to help you cope in the new world we live in
27 Coronavirus: Oxygen equipment meant for Ireland held back by Italy
28 The chickpea stew that broke the internet in the US is here. Give it a go
29 Coronavirus: Older people who leave houses may be asked to go home - Harris
30 Cliff Taylor: A big recession is coming but it’s not a rerun of 2008
31 Coronavirus: Healthcare worker in Republic dies after contracting virus
32 Laugh in the time of Corona: Favourite funny books
33 Coronavirus: Essential workers should carry identification, says Garda Commissioner
34 Jennifer O'Connell: Covid-19 is normalising mass surveillance of citizens
35 World will need new financial system after Covid-19
36 Coronavirus: Construction sector most significant part of new shutdown
37 Coronavirus: ‘you may have heard of a game called Plague Inc’
38 Coronavirus: No funeral Masses to be held in Clogher diocese
39 British exceptionalism backfires in style as Johnson tests positive for coronavirus
40 ‘Coronabonds’ row could endanger the European project
Real news has value SUBSCRIBE