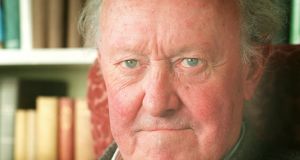 File image of Conor Cruise O’Brien. In the Labour Party his views on the North caused huge dissension, but with the support of Brendan Corish he swung the party behind his policies.

Conor Cruise O’Brien, the centenary of whose birth occurs on November 3rd, was one of the most influential and courageous public figures to emerge in the history of independent Ireland.

He had an enormous, and often divisive, impact on public opinion during his relatively short eight years as a TD between 1969 and 1977, but he exercised power through the force of his ideas, as expressed in books, essays and newspaper articles for more than half a century.

1 Warning of serious brain disorders in people with mild coronavirus symptoms
2 Airborne coronavirus: What you should do now to help yourself stay safe
3 How fraudsters used lockdown to lure Irish victims into boats and caravans scam
4 Storey funeral highlights fundamental problems with Sinn Féin
5 Mary Trump’s book: Eight of its most shocking claims about the US president
6 One million people have now downloaded Ireland’s Covid-19 tracker app
7 Miriam Lord: Docklands Dáil’s lack of drama has TDs longing for Leinster House
8 CAO: College applications for high-points courses surge
9 Coronavirus: US cases top 3m as Trump eyes reopening of schools
10 UK’s Border plan ‘could undermine North’s place in customs territory’
11 Coronavirus: Eleven new cases and no further deaths reported in the Republic
12 Israel faces ‘greatest crisis’ as it loses control of coronavirus spread
13 It's time to wave goodbye to single-sex schools
14 Minister seeks report on use of laughing gas following death of a teenager
15 Dana defamation action struck out at the High Court
16 Passenger who promised driver a ‘few quid’ after crash awarded €10,000
17 UL says most students will be allowed on campus for just one week each month
18 Bobby Storey: The IRA's planner and enforcer who stayed in the shadows
19 My husband had to become my carer after we had our son. I was diagnosed at 26
20 ‘Camping fits well into a Covid-19 world’
21 During lockdown I did not bake, teach myself anything or read a book
22 Tallaght locals unmoved by Sinn Féin Holohan controversy
23 Audi adds third all-electric car to its line-up
24 The Irish-American who led the last invasion of Britain
25 Varadkar: jobs stimulus plan will be ‘radical and far-reaching’
26 Denmark’s answer to Ikea signs deal for first Dublin outlet
27 Land Rover lookalike Ineos Grenadier revealed
28 The strange tale of the cigarette lighter that spread coronavirus around a city
29 Taoiseach’s visit to Belfast to meet Arlene Foster and Michelle O’Neill postponed
30 My mother showers her negativity and toxicity on me and has ruined my life
31 Rishi Sunak is the Beethoven to Boris Johnson’s brass band
32 Interference with work of receiver had to stop in former car dealer case, court told
33 Land Rover Defender: A reboot that lives up to the hype
34 Tipping Point: DeChambeau’s transformation raises questions, but who will ask them?
35 Pandemic has shown how ‘undervalued’ frontline workers were – Higgins
36 Scientists join forces to investigate airborne risk of coronavirus
37 Even the doghouse has style at Kilmainham terrace for €425k
38 Miriam Lord: Minister for Agriculture tries to get himself out of the manure
39 Kathy Sheridan: Covid pandemic a fertile ground for conspiracists, zealots and bigots
40 US firms can deny workers insurance coverage for contraception
Real news has value SUBSCRIBE