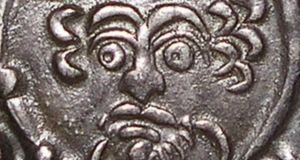 A coin from Henry II’s reign. The Battle of Áth an Chip in the summer of 1270 was the biggest reverse the Anglo-Normans suffered since first landing in Ireland a century before.

Irish victories over a foreign foe are rare enough to be revered through the centuries, yet one 750 years ago has been almost completely forgotten.

The Battle of Áth an Chip in south Leitrim, which occurred in the summer of 1270, was the biggest reverse the Anglo-Normans suffered since first landing in Ireland a century before. It was, according to the Annals of Clonmacnoise, “one of the sorest battles that the Irish ever gave to the Galls in Ireland”, and to the Annals of Ulster “not greater than it was any defeat, or battle-rout that the Gaidhil (Gael) ever gave to the foreigners in Ireland previously”.

The battle took place outside Carrick-on-Shannon at Áth an Chip (the fort of the tree stump). It is roughly now where the appropriately named Battlebridge is located.

The Anglo-Normans intended to complete their conquest of the island by defeating the Connacht king Aedh Ó Conchobhair (Aodh O’Connor) whose stronghold coincided with the modern counties of Leitrim and Sligo.

Many Irish lords, including O’Connor’s father, sought to align themselves with the Normans out of self-interest and to preserve their lands, but not Aedh. He refused to submit to the Normans and attacked them at will. In 1269 the English justicar (king’s representative) Robert d’Ufford began building Roscommon Castle in Roscommon town with a view to having a stronghold from which to take the rest of Connacht.

D’Ufford decided to join forces with Walter de Burgh, the Earl of Ulster and Lord of Connacht, to take on O’Connor once and for all.

The pair led their army on a march from Athlone to outside Carrick-on-Shannon where they set up camp. After five days of marching, de Burgh was advised to make peace terms with O’Connor.

O’Connor reluctantly entered de Burgh’s camp to make peace, but only did so after his enemy agreed to hand over his brother William as a hostage. This would ensure no harm came to O’Connor during the negotiations.

For reasons which have been lost in the midst of time, negotiations broke down and a furious O’Connor returned to his own camp and ordered that the two attendants with William de Burgh be slaughtered. Later William de Burgh was also killed.

He also harassed the enemy in their camps as a “furious, raging, tearing lion goes about his enemies when killing them, so that he permitted them neither to eat, sleep, nor be at rest” for two nights, according to a contemporary account.

The battle on July 29th, 1270, was a rout as the English force and their Irish allies were ambushed in front and rear by O’Connor’s forces, with the support of Turlough O’Brien, a relative of the King of Thomond.

Hemmed in by the Shannon and attacked on all sides, de Burgh’s army was routed while the other half of his army waited on the other side of the river.

The Annals of Connacht recounted the slaughter: “At this moment the men of Connacht fell upon them. Their rearguard was dislodged and their van broken and nine of their noblest knights were killed on that moor, including Richard of the Wood and Seon Butler, and they left a hundred horses on the field, with their saddles”.

The number of horses left behind suggests the Anglo-Norman army could have consisted of 5,000 men, a huge army by the standards of the time.

O’Connor’s victory may have been strengthened by the presence of 150 galloglaich, or mercenaries, from Scotland that were given to him as a wedding present by a Scottish chieftain.

O’Connor’s wrath did not stop there. He went on to burn Roscommon Castle and other Norman strongholds in Connacht to the ground.

Nothing remains of the battlefield site, but an archaeological dig in the mid-20th century uncovered a hoard of coins from Henry II’s reign which are now in the National Museum of Ireland. It may have been left there by Richard of Exeter who had sat out the battle on the far side of the Shannon in Co Roscommon and failed to come to the aid of his ally.

The result of the battle was that the Normans did not conquer the rest of Connacht for a generation afterwards.

The Carrick-on-Shannon Historical Society was determined not to allow the year pass without marking the anniversary of the battle. The tireless chairman of its commemoration committee, Noel MacLochlainn, has written a book, Battle of Connacht 1270, which is available on Amazon.

A series of commemoration events were planned, but had to be postponed because of the Covid-19 outbreak.

MacLochlainn says the relentlessness of the Anglo-Norman and English conquest of Ireland erased much of Ireland’s Gaelic heritage and the collective memory of battles like Áth an Chip receded.

He sees it as no less than “a 200-year conquest of the British Isles by Anglo-Normans that was halted on the Shannon river between Moylurg and Moynissy (modern Kiltubrid and Kiltoghert parishes)”.

Next month he intends to start planning to mark the battle with a re-enactment in the summer of 2021, subject to the wretched Covid-19 not being still around .

Putting the pen back in the pension
Staying the course with golf
Proof of the pudding
Revealing mother and baby home records
Accommodating breastfeeding at work
Confronting anti-Semitic hate speech
Shared islands, divided opinion
A thank you to Pope Francis
Action on mother and baby homes
How essential is chocolate?