Where was climate change, urban crime and political reform in the great debate? 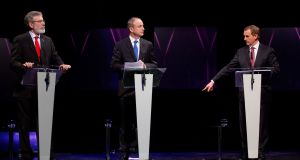 RTÉ had claimed its seven-way party leaders’ debate on Monday night would be about “issues that really matter”. These turned out not to include climate change, the failure of political reform or pressing issues vital to young people.

Viewers hoping to stay in Ireland, and needing mortgages for affordable houses or reasonable rents, were little the wiser. Their long wait for substance was the televisual equivalent of lying on a hospital trolley.

And it was left to Renua’s Lucinda Creighton to catch the public mood on urban crime.

On a day when a gangland funeral had some citizens afraid to leave home or go to work in a part of Dublin, with public resources wasted on criminals, RTÉ evinced no sense of outrage. It main news report on the funeral might as well have been filed by its entertainment correspondent.

The leaders’ debate was diverted away from organised crime by asking about the closure of rural Garda stations.

Presenter Claire Byrne put the softest question of the night to Gerry Adams. Would he like to say anything about the Special Criminal Court?

Well, no, actually. We knew his party’s position, he said, and moved on.

The Taoiseach repeated his pledge to open a second Special Criminal Court at who knows what public expense. This is the justice equivalent of pouring public money into the banks rather than getting to the root of the problem.

Some Irish media are short of the funds necessary for in-depth investigation even where editors are willing to undertake it. But RTÉ can do better as a public service broadcaster. It recycles too many safe panellists, and has too little radical bite.

RTÉ is not hungry enough. Its key presenters are paid big private-sector salaries, complete no declaration of interests and sometimes have agents who may represent other people who can benefit from what RTÉ does.

But the station certainly has very good independent journalists. They could do more imaginative and lively work.

It was left to Mark Little, vice-president of Media at Twitter, to raise the Green Party.

That was long after the debate ended in a “post-match” chat. He said that of all parties mentioned in an exceptionally active online discussion, the Greens were the fourth most-mentioned.

Yet RTÉ, which went to court to defend its right to keep the Greens out of the debate, ignored environmental issues. These will shape our future.

Global climate change policy has serious implications for Irish agribusiness and other sectors due to excessive emission levels here. While the government is conflicted on it, RTÉ seems to think this does not “really matter” in a leaders’ debate.

Little also reported many people checking facts online. RTÉ should have done so. It could have framed hard issues such as rents, health and crime with accurate statistics to make it harder for leaders to bluster.

And not for RTÉ or Irish leaders a series of more than half-a-dozen tough two-hour TV debates such as candidates for the US Republic Party presidential nomination have been through. Spin doctors and complacency win out here.

RTÉ, like the health service and education sectors, holds back when it to comes to reinventing itself robustly for the times we live in. Finger-pointing and interruptions by presenters are no substitute for hard work that can put politicians on the spot.

RTÉ recently abdicated its responsibility to interpret the heavy defeat that leading political parties suffered in the presidential age referendum.

It has not gone after Dáil Deputies on broken promises of political reform or the facile banking inquiry. We still do not know exactly where €60 billion went that was replaced by public funds.

RTÉ faces too little serious competition from private media, media that may have other commercial agendas. Ireland could do with a TV service as bright and challenging as Britain’s current Channel 4 News.